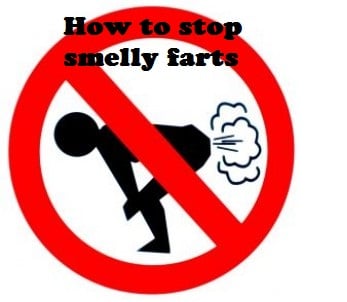 Stinky and smelly farts or flatulence can have a negative impact on you and other around this does have to be so, you may want to stop farting altogether but this cannot happen so this post will look at the causes and different ways to fix, reduce or stop the smelly ones.

The reasons we have flatulence?

Non-smelly gas is usually the very loud farts they have about 59% nitrogen 29 % hydrogen 9 % carbon dioxide 7 % methane and 3 % oxygen they usually come from our mouth when we eat fast or chew. The bubbles of nitrogen and carbon dioxide are usually large so when we force them out of our butt the fart makes a loud sound but it is odorless.
Silent farts are usually smelly farts they are made from the bacteria feeding on food in our intestine they produce small bubbles of gas, so they exit our butt quietly. They are made up of the gas Indole, Skatole, Hydrogen sulfide (H2S) ( is the source of sulfur in the intestine) and  Mercaptans. Sometimes we do pass loud and smelly farts when the big gas bubbles mix with the small bubbles.

There is medication which also causes stinky gas such as:

Intestinal disease and illness also give us this malodor flatulence such as  :

The healthy microbes that live in our gut are known to promote a wide range of health benefits. In order for these microbes to obtain nutrients, we must eat foods that cause gas.

When there is undigested food in the large intestine, including fiber and other hard-to-digest carbohydrates, these microbes are put to work. In turn, more gas is created – as well as short chain fatty acids, which promote the growth of other beneficial bacteria.

That said, if you notice that the amount or smell is excessive – and your diet is not ideal – it could mean that you are suffering from an underlying problem.

Our digestion takes millions of years of evolution and is extraordinarily efficient if it is really healthy. Therefore, an excess always indicates that digestion is not optimal. It fails somewhere and you should pay attention to it.

Artificial sweeteners cannot be broken down by many persons digestive system so stay away from sugar-free sweeteners and beverages with sweeteners such as sorbitol, xylitol, and mannitol they are also culprits of bad flatulence. Fructose-containing corn syrup can cause some people to have gastric ulceration and flatulence because their small intestine is unable to absorb large amounts of fructose.

Ways to stop your stinky farts?

I have used apple cider vinegar for just over two years it was recommended by my dad who had been drinking it for years for his diabetes. I can say it really works in keeping his blood sugar low (1) that he has stopped using all medication given by his doctor. Over the years using apple cider I have seen a number of changes one of the first was my farts were odorless. I know there were times after I would have had a few pieces of fried chickens and  ice cream I would have enough gas to supply an entire city and my farts would really smell foul( I am lactose intolerant)  I would take a teaspoon of natural apple cider vinegar along with a glass of water within 30 minutes and my fart would be odorless. If it’s really bad I would add two teaspoons before I consume dairy products I would usually drink apple cider first this usually prevent those embarrassing moments.

According to Medscape General Medicine based on research apple cider vinegar reduce the number of harmful bacteria in food by creating an unlivable environment for unhealthy bacteria (2). Apple cider is also a Prebiotics (mind you not probiotic) it has a carbohydrate called pectin which attaches itself to waste products in the intestines one such is bacteria and take them  out  of the system to depose of as waste this leaves the probiotic in your gut to multiply and develop a healthy gut thus reducing gas.  This is one the best apple cider vinegar to use check it out. [easyazon_cta align=”left” identifier=”B001I7MVG0″ key=”small-light” locale=”UK” tag=”lorecentral-21″]

2 Use activated charcoal to eliminate flatulence.

Activated charcoal is a fine powder charcoal that was subject to heat at over 1000 degrees. It has millions of pores which trap the gas as it passes through your system, just like a sponge. A teaspoon of activated charcoal has the surface area of a football field and it has been used by doctors and hospitals for over 150 years to remove toxins and poisons from our bodies. Activated charcoal is very good at absorbing hydrogen sulfides which is responsible for those obnoxious air bagel. The research was done on charcoal and gas some studies shows it works other disagree so it inconclusive but many people swear that nothing else works better than this you can read reviews on Amazon. Also, learn more about activated charcoal.

3. Add probiotics to your diet

There are over 100 trillion bacteria in our gut they can either be good bacteria (as in probiotics) or bad bacteria. The good should out outnumber your bad bacteria by 9 to 1 if not this results is gas and many other effects. The use of antibiotics medications and stress can cause your system to have reduced the number of good bacteria.   Creating a healthy digestive tract will stop your smelly gas. Probiotics help by killing the bad bacteria that feed on carbohydrates and produce foul gas in your large intestine it also increase your immune system to fight these nasty microorganisms. Probiotics can be found in yogurts, kefir, pickles, sauerkraut and kombucha tea.

For serious cases or gas or persons with an illness like Irritable bowel syndrome and Lactose intolerance, you may need probiotic supplements to look for 10 strains or more of the different bacteria. Studies have also shown that probiotic preparations containing a lactobacillus or bifidobacterium strain can reduce the symptoms of irritable bowel syndrome (1).They should be  Enteric coated probiotic capsule they can bypass the stomach acid to reach our intestine so that the healthy bacteria can remain intact and to repopulate.

Digestive enzymes are the force behind digestion they are proteins made of amino acid the come together in the forms of chains to break down food into the nutrients your body needs. As you get older they can reduce numbers or they can decrease due to illness, medication, and stress. If you don’t have enough enzymes it can lead to gas and bloating because there will be excess food particles for bacteria to break down resulting in more gas bubbles. You can use a digestive enzyme supplement such as NOW Foods Super Enzymes (read the reviews).

Persons who are lactose intolerant ( you have a deficiency in the enzymes lactase) they can add supplements like Lactaid to their diet.

Beano is another product which has enzymes to break down beans, vegetables, and whole grains. Another way to stop gas caused by beans is to soak your beans overnight before cooking to get rid of the sugars which cause the gas.

5. Peppermint Oil is effective against flatulence

There are some studies which show that peppermint oil can reduce the expulsion of flatulence and also reduce stomach muscle spasm, therefore, acting as a stomach and colon muscle relaxant. A study was done using fiber, antispasmodics and peppermint oil to treat irritable bowel syndrome the results showed that all were effective in the treatment of IBS peppermint was the best. Peppermint oil reduced symptoms of IBS by 57% which was 25% more than those who took antispasmodics and 44% more than those who took fiber and 26% of the patients saw symptoms after treatment. It is recommended to take about 90 mg of peppermint oil a day to help reduce bloating, gas and bowel movement for people with IBS excessive gas. When purchasing peppermint oil capsule for gas look for enteric coated which will allow the capsule to pass through until it reaches your colon. Heather’s Tummy Tamers Peppermint Oil Capsules is a highly recommended peppermint capsule but there are other brands you can check that works.

6. Use a gas deodorizing fart pads

For many of these digestive disorders above it can be a long struggle to find a cure for the persons who experience them know. Many of the above steps can take a while to work. For those people, they can use

a deodorizing pad these pads are made with an activated charcoal cloth to remove the foul smell from farts.

Carbohydrate tablets are designed to absorb malignant sulfur-containing gases in the colon before they leave the anus, but the results of the study have been controversial by gets great reviews from Amazon customers . Simeticone works by digesting small gas bubbles moving in the intestine. For years it has been the most commonly used method of treating air disorders, but according to experts, its benefits are questionable.

8. Use an elimination method

Whenever you think that something in your diet is to blame for abnormal symptoms of excessive flatulence and smelly farts, it is best to try an elimination diet or a detox plan . Stop eating all the lactose, for example, and then see how you feel.

Here is a list of foods rich in FODMAP:

Although many FODMAP carbohydrates are healthy, they can be difficult to break. Each individual is different, so it is best to keep a food diary and identify the key triggers. Once you understand the cause better, you can create a more effective action plan. 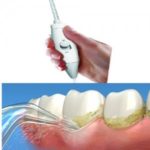 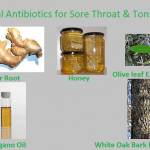