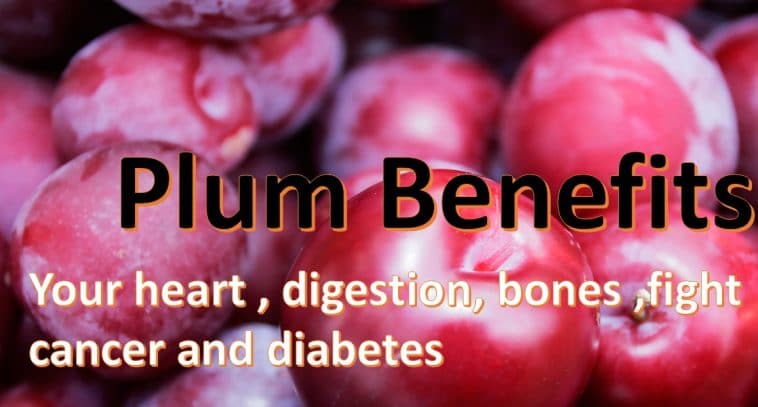 Plum is a superfood which exceeds the antioxidants and phytonutrients in blueberries. These antioxidants goes around our body getting rid of free radicals that are around cancer and heart disease .It is also rich in vitamins , minerals and fiber which is one of the reasons people use them as a laxative .Plums has a long list of benefits from such as skin health ,boosting of your immune system , cardiovascular health , fight cancer , help control diabetes and boost bone health.

A series of studies conducted at Texas AgriLife has looked into the anti-cancer, anti-diabetic and bone loss protection benefits of the plum extract. The three different studies that were are going to look into for this article, they all corroborate the positive impact of plum on human health against life-threatening diseases like breast cancer and obesity-induced diabetes and bone loss.

Let’s take a look at these benefits of plum and the associating studies one-by-one:

According to the researchers of the study that looked into the anti-cancer benefits of the plums, it’s the phenolic compounds in the plum that are responsible for the death of cancer cells in the body. These phenols are the organic compounds that occur naturally in stone fruits like plum. The study was conducted by Dr. David Byrine, AgriLife Research plant breeder, and Dr. Luis Cisneros-Zevallos, and was published in the Journal of Agriculture and Food Chemistry.

Plum has not only show success with breast cancer . Research has shown that the disruption of the microbiota in your intestine can cause inflammation that that develops cancer . Dr . Nancy Turner who did a research on dried plum and colon cancer said her research shows that plum helps by keeping the beneficial bacteria in your gut intact so as to reduce the development of colon cancer.

In another research, funded by Texas AgriLife Research, the anti-diabetic benefits of plums, peaches, and nectarines were studied. The findings of the study corroborate that the bioactive compounds in these stone fruits can fight off obesity-related diabetes.

According to Dr. Luis Cisneros-Zevallos, AgriLife Research food scientist, stone fruits are a weapon against “metabolic syndrome” which can result in obesity and inflammation. Dr. Luis Cisneros-Zevallos, who is also and associate professor at Texas A&M University, acknowledges that diet, genetic disposition, and lifestyle have the ability to increase the chances of obesity in individuals, but it’s the metabolic syndrome that’s a major concern.

Plum has four major phenolic groups: anthocyanins, quercetin derivatives, collagenic acids and catechins, and all of them have shown to work on the fat cells, vascular endothelial cells and macrophages, Zevallos explains in his research. Plum has a low glycemic index, and has shown to help in reducing blood sugar and triglyceride in the body.

In a study conducted by Hooshmand, S. et al. 2016, the effects of dried plum on bone density were evaluated. The randomized, controlled trial included osteopenic postmenopausal women who were given 50g of dried plum for six months. The bone density of the participants was calculated before after the trial ended. The results of the research confirm the ability of dried plum to reduce the loss of bone density in osteopenic, postmenopausal women. Plum is also rich in polyphenols and potassium which strengthens your bones especially in women over 50 who may be affected by osteoporosis.

“Over my career, I have tested numerous fruits, including figs, dates, strawberries and raisins, and none of them come anywhere close to having the effect on bone density that dried plums, or prunes, have,” said Bahram H. Arjmandi, Florida State’s Margaret A. Sitton Professor and chairman of the Department of Nutrition, Food and Exercise Sciences in the College of Human Sciences. Source

Studies have shown that phenolic compounds in plum have anti obesity , anti inflammatory properties in cell when which helps to prevent high bad cholesterol and prevent cardiovascular diseases. Plum is also a source of vitamin K which stops the hardening of the arteries known as atherosclerosis that leads to heart attack .

Have you been taking plums regularly? If not, it’s high time that you make plum and other stone fruits a part of your regular diet.