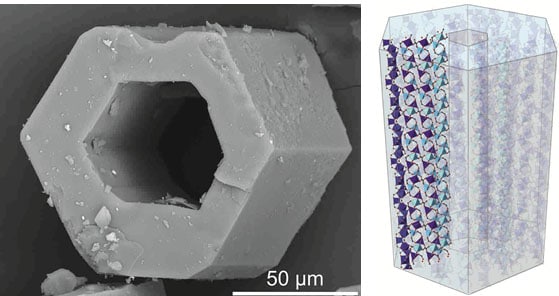 Nature is able to create complex structures through the controlled repetition of fragments, as in the case of DNA. Complex biological systems rely on these structures to fully develop their functionality. A team of researchers led by the Consejo Superior de Investigaciones Científicas (CSIC) has created in the laboratory complex materials containing different sequences of chemical elements in its structure. The paper, published in the journal Science Advances , opens new avenues of study in fields such as communications or energy storage.

The physical properties of materials such as conduction, magnetism or Catalytic activity depend to a large extent on the metallic elements that these they contain. Also its distribution in the structure influences. “Until now, it was almost Impossible to control and determine how the various Elements within the structures, “says Felipe Gándara, CSIC researcher at The Institute of Materials Science of Madrid. However, this group of scientists It has achieved it at atomic and nanoscale scales using known materials Such as metal-organic networks, which allow multiple controlled inclusion of Metallic elements.

The metal-organic networks have received great attention in the last years for their Applications in fields such as the storage of gases, for example due to the High levels of porosity they possess. In addition, they have ordered structures. In this In this case, researchers have selected a type of metal-organic networks with a Structure that causes the metallic elements to be arranged in the form of propellers, to Incorporate multiple metal elements.

“We have selected different metals to occupy specific positions within Of the propellers. The result is different sequences that are repeated throughout the Structure of the metal-organic network, “explains Gándara. To determine the distribution Of the metallic elements have been combined X-ray diffraction techniques And neutron, and electron microscopy and microanalysis techniques.

Develop artificial materials that have a complexity that resembles Natural systems opens new avenues for the improvement of properties in applications In multiple fields. In addition, the high control of the structures allows to study the Relationship between the structure and the properties of the materials, allowing the design Of new advanced materials.