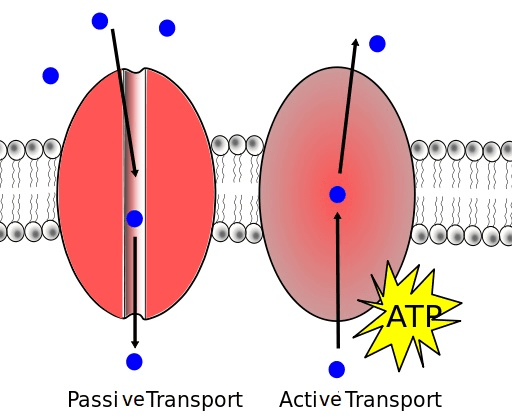 There are few important cells in the body that has some very essential processes deep within. These processes are very important for the development and growth of every organism whether it is an animal or a plant. It is the fact that every internal process has a vital and unique mechanism done to make it successful. In this regard, nutrients, chemicals and other substances are flowing to and fro the cells with the use of certain transport systems. These transport mechanism systems are further classified into two different systems named as active and passive transport systems.

Defining in simple words active transport is called ‘active’ due to the inclusion of one vital component and that is the use of energy. This important component is being used by the cells, in the form of ATP (Adenosine Triphosphate) for it to be able to transfer most substances in and out of its cellular membranes. While On the other hand, passive transport is termed as passive because it is just a plain old ‘passive’ mechanism. It does not utilize any energy (ATP) from the cell for it to carry out the said processes.

While on the other hand passive transport is not against but along the concentration gradient. Because the cell sees that the same ions or molecules can be transferred to the other side immediately due to a ‘favourable’ concentration gradient, it no longer expends any energy. The word ‘favourable’ simply means that it follows the laws of normal diffusion. When the substances from the more concentrated internal environment of the cell are to be transported outside, that is for example the outside happens to be less concentrated, then the substances can easily flow out.