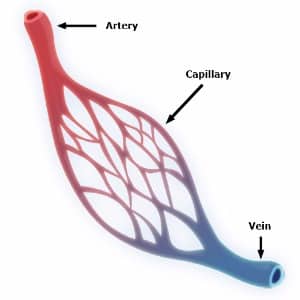 These three types of organic ducts through which the blood circulates are often confused.

All the vital functions of the human body, and all psychological processes like thinking, feeling and acting, would not exist if the circulatory system did not do its work. However, this part of the organism is not homogeneous, but consists of different types of ducts, branches that cover almost all tissues of the body and keep the cells alive by providing them with the oxygen and materials they need.Next we will see the difference between arteries, veins and capillaries , and the way in which these small channels allow us to live.

Although all the cells of the human body work with relative autonomy, fulfilling their small role, they need the participation of something that goes beyond their own individuality. It is not only necessary to be in a stable medium created by the surrounding membranes, but also a constant supply of oxygen and materials to be maintained in an operative way.

Of this latter task, among other things, it is justly charged with the circulatory system. This is composed of veins, arteries and capillaries, as well as the heart, the organ that helps blood circulate through the inner part of these organic ducts.

On the other hand, the blood also acts as a communication channel, not only serves to nourish the cells. In particular, it transports the hormones from one side to another, causing them to be received by their respective target organs to awaken in them a change: a contraction, the segregation of more hormones, the adoption of another form, etc.

The difference between arteries, capillaries and veins

The main differences between the veins, capillaries and arteries (all parts of the circulatory system) are as follows.

1. Capillaries have no muscular walls

Capillaries are the thinnest ducts of these three categories , by far. On the other hand, its walls are not associated with muscular tissues.

2. The veins return to the heart, arteries come out of it

The arteries are the first type of conduit through which the blood passes through the heart. The veins, on the other hand, are the ducts of entrance to this.

3. The capillaries fulfill the function of “bridge”

The capillaries lie between the veins and the arteries . That is, they are ramifications that leave the arteries and rejoin to form veins.

The arteries cause the blood to flow, preserving the pressure inside the heart . In the interior of the veins, however, this pressure does not occur, and so does the capillaries.

5. In the capillaries there is exchange of substances, in veins and arteries,there is none

The capillaries, in addition to being the narrower ducts, also have very thin walls , ideal for certain substances to pass through. This is just what happens: there are particles that leave the blood to reach target cells, and others enter the bloodstream through them.

In this way, the cells get the necessary resources to live and, on the other hand, the hormones can enter the blood and navigate in it until reaching its destination.

6. The arteries regain their shape more than veins and capillaries

The walls of the arteries are thicker than those of the rest of the ducts of the nervous system, and easily retain their shape .

7. Veins carry non-oxygenated blood, the other two with oxygen

As it is their turn to return to the heart, the blood that transports the veins has already lost its oxygen by the way , and for that reason must be taken back to the lungs to the zones occupied by the alveoli.

As the blood flowing through the veins is not subject to the pressure generated by the impulse of the heart, it is carried to its destination by a system of valves that prevent this liquid from going in the opposite direction to the one that should go.

Although these types of blood vessels  look alike in the most basic sense , they do not have the same properties nor fulfill the same function. Whether for form, parts or the role they play in the circulatory system, they are easy to distinguish both in image and live, working on their tasks.

Of course, it must be taken into account that an injury, for example, does not have the same repercussions if it occurs in an artery, vein or capillary. The latter are the most expendable, being so narrow that they are usually beyond the reach of the human eye, and their rupture as a whole will produce bruising, but usually not much more . In contrast, a cut in the other two can be deadly.