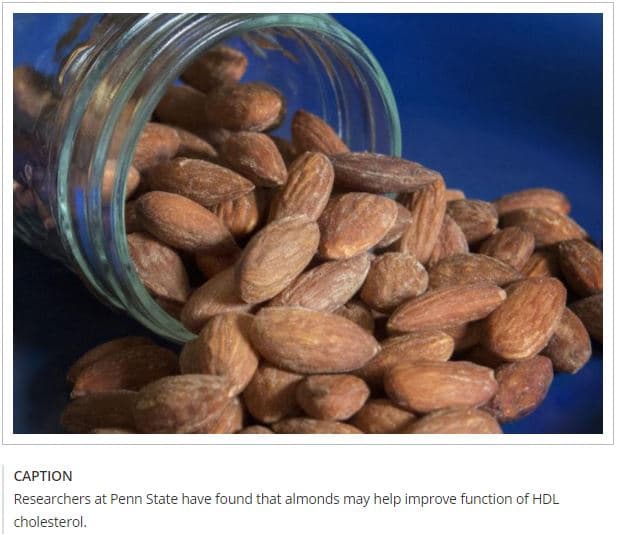 Eating almonds on a regular basis may help boost levels of HDL cholesterol while simultaneously improving the way it removes cholesterol from the body, according to researchers.

Penny Kris-Etherton, distinguished professor of nutrition at Penn State, said the study, published in the Journal of Nutrition, builds on previous research on the effects of almonds on cholesterol-lowering diets.

The researchers wanted to see if almonds could not just increase the levels but also improve the function of HDL cholesterol, which works by gathering cholesterol from tissues, like the arteries, and helping to transport it out of the body.

“HDL is very small when it gets released into circulation,” Kris-Etherton said. “It’s like a garbage bag that slowly gets bigger and more spherical as it gathers cholesterol from cells and tissues before depositing them in the liver to be broken down.”

Depending on how much cholesterol it has collected, HDL cholesterol is categorized into five “subpopulations,” which range from the very small pre?-1 to the larger, more mature ?-1. The researchers hoped that eating almonds would result in more ?-1 particles, which would signal improved HDL function.

In the controlled-feeding study, 48 men and women with elevated LDL cholesterol participated in two six-week diet periods. In both, their diets were identical except for the daily snack. On the almond diet, participants received 43 grams — about a handful — of almonds a day. During the control period, they received a banana muffin instead.

At the end of each diet period, the researchers measured the levels and function of each participant’s HDL cholesterol. The researchers then compared the results to the participants’ baseline measurements taken at the beginning of the study.

The researchers found that compared to the control diet, the almond diet increased ?-1 HDL — when the particles are at their largest size and most mature stage — by 19 percent. Additionally, the almond diet improved HDL function by 6.4 percent, in participants of normal weight.

“We were able to show that there were more larger particles in response to consuming the almonds compared to not consuming almonds,” Kris-Etherton said. “That would translate to the smaller particles doing what they’re supposed to be doing. They’re going to tissues and pulling out cholesterol, getting bigger, and taking that cholesterol to the liver for removal from the body.”

An increase in this particular HDL subpopulation is meaningful, Kris-Etherton explained, because the particles have been shown to decrease overall risk of cardiovascular disease.

Kris-Etherton said that while almonds will not eliminate the risk of heart disease, they may be a smart choice for a healthy snack. She added that in addition to their heart-healthy benefits, almonds also provide a dose of good fats, vitamin E and fiber.

“If people incorporate almonds into their diet, they should expect multiple benefits, including ones that can improve heart health,” Kris-Etherton said. “They’re not a cure-all, but when eaten in moderation — and especially when eaten instead of a food of lower nutritional value — they’re a great addition to an already healthy diet.”