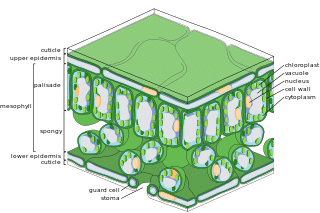 The stomata of  plants are a cellular type that allow the gaseous exchange of the leaves of the terrestrial plants. Stomas are a structure that is formed by two cells found in the epidermis of the green tissues of plants, especially on the surface of the leaves, both in the bundle and in the back, being more frequent on the underside. Plants adapted to droughts and severe sunstrokes usually have fewer stomata in general and these are located much more often on the underside of the leaf to reduce the loss of water by perspiration. In this way stomata are protected from the sun and allows better control of perspiration (loss of water), so stomata can exchange gases without danger of dehydration.

Function: the roots absorb water and nutrients from the soil that rise by capillarity to the stomata by which water is lost in the form of vapor. In addition by the stomata the gas exchange takes place, the oxygen generated by the photosynthesis leaves and the CO2 necessary for the same is captured . Stomatal closure opening and depends on several factors, as light, the water available, ions such as K + or Na ion + or CO2 levels .The roots never have stomata. Parasite plants that do not have chlorophyll do not have stomata and the aerial parts of plants, which do not have chlorophyll, will have non-functional stomata, such as flower petals. The aquatic plants also do not have stomata since no need to exchange gases dissolved in water with its environment,  floating plants  having a part of the submerged body only have stomata present in those areas in contact with air.

They are small openings in the stem of the plants. It is found in young branches, in roots they can be arranged in pairs, one on each side of the lateral roots. Also in some fruits like the apple and the avocado.
In the smooth barks like the one of Rapanea  Oxygen enters through lenticels because it is   necessary for the cellular respiration. The entry of carbon dioxide into the lenticels is not important, as the photosynthesis is not carried out on the stem. The lenticels allow the interchange of gases between the metabolically active interior tissue and the surrounding air or pockets of air in the soil.

Origin . In peridermis initiated in subepidermal layers, the first lenticels frequently form below the stomata. The parenchyma cells surrounding the sub-static chamber are actively divided and form the lenticella felogen, which produces felodermis inward and outward filling cells. The latter accumulate in quantity, break the epidermis and protrude outwards.

Lenticels are often formed before the development of the peridermis, as in the stems of Aristolochia and Menispermum .

Main difference between stomata and lenticels 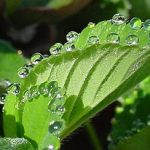 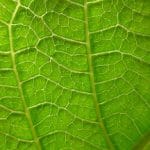