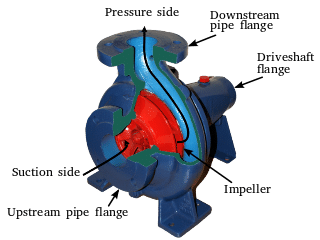 In this article we will talk about the differences between the pumps, since they are machines that absorbs mechanical energy that can come from an electric motor, thermal among others. After it absorbs the energy it transfers it to a fluid as hydraulic energy which allows the fluid to be transported from one place to another, either at the same level or at various levels as well as at different speeds.

This time we will talk about the  differences between Centrifugal and Peripheral Pump .

CENTRIFUGAL PUMP
In itself the centrifugal pumps are denominated like rotodynamic pumps; At present it is one of the most used machines to get to pump liquids in general. Every centrifugal pump is rotating and at the same time is a type of hydraulic pump that transforms the mechanical energy of an impeller in kinetic energy or as it is also called pressure of an incompressible fluid. The fluid enters the center of the impeller or impeller which has blades for conducting the fluid and by effect of the centrifugal force is driven outwards, when it is already driven to the outside, it is picked up by the casing or pump body . Due to the geometry of the body, the fluid is drawn to the outlet pipes or to the next impeller.

They are usually machines based on the Euler Equation and are classified in several ways:

Depending on the position of the axis of rotation or arrow in: vertical and inclined and horizontal.
By the direction of the flow in: radial or mixed and axial.
Also they are classified by the design of the armor in: volute and those of turbine.
For its suction form in: double and simple.
For its design of the mechanic shell in: radially split and axially split.
centrifugal pump

Summary of the differences between Centrifugal and Peripheral Pump
One of the most noticeable differences physically is the size of the turbine, the peripheral has a smaller turbine while the centrifugal pump is larger.