By learning how a recently discovered immune cell works in the body, researchers hope to one day harness the cells to better treat allergies and infections, according to new Cornell University research.

Type 1 regulatory (Tr1) cells are a type of regulatory immune cell that help suppress immune responses, including inflammation and tissue damage, but very few details were known about their development and function.

“The more we understand about how these cells develop, the signals and pathways they use, the more likely we’ll be able to devise approaches to manipulate them,” said Avery August, professor of microbiology and immunology in Cornell’s College of Veterinary Medicine and the paper’s senior author. Weishan Huang, assistant research professor of microbiology and immunology, is lead author.

Doctors employ antigen immunotherapy to treat allergies by administering a regimen that exposes a patient to increasing doses of an allergen over a period of months. Since allergies are caused by an overactive immune response to an allergen, the treatment works because Tr1 cells help suppress the immune system and lower inflammation. In the future, clinicians may want to enhance the pathway to produce more Tr1 cells, August said.

But when treating viral infections such as the flu, bacterial infections and tumors, clinicians may want to selectively block the pathway to lower the number of Tr1 cells. In experiments with mice, August and colleagues found that Tr1 cells increase when a mouse is infected with viruses or bacteria or when fighting tumors. By tempering the development of Tr1 cells, and carefully reducing their activity to suppress the immune response, patients may recover faster from certain diseases.

“This is a balance because these cells are there for a purpose, and we think their purpose is to make sure the immune system doesn’t destroy and cause pathology in an immune response,” August said.

The danger with flu, for example, is that at a certain point other types of immune system T cells, whose purpose is to kill infected cells, start to destroy tissue. In such cases, an overactive immune response can lead to death.

In the study, August, Huang and their colleagues bred genetically altered mice so they carried a gene that makes Tr1 cells glow green when they develop, which allows for easy tracking. They then bred another type of mouse that had fluorescent Tr1 cells and also allowed the researchers to specifically block the enzymatic activity of ITK. Using the same protocol, they created a third type of mouse that lacked ITK.

In both the mice where ITK was inhibited and the mice that lacked ITK, Tr1 cells failed to develop. Using blood cells from anonymous human volunteers, they got the same results.

In a second experiment, the researchers identified a second critical enzyme in the pathway that leads to the development of Tr1 cells. This other enzyme, called IRF4, is a transcription factor that regulates the expression of a number of genes and proved key for controlling whether Tr1 cells developed. The team also confirmed that the same pathway exists in people. 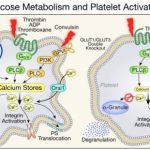