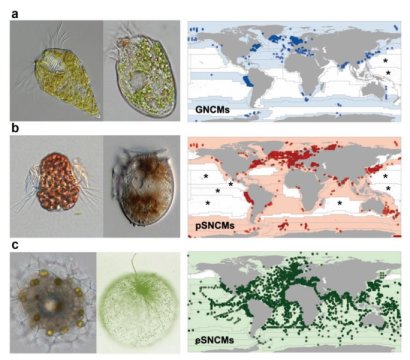 New research from Swansea University academics has found that our oceans are full of microscopic ‘bodysnatchers’ that have a significant impact on the ocean’s food-web.The research, led by Dr Aditee Mitra and Professor Kevin Flynn from the University’s College of Science and published by the Royal Society journal Proceedings B show that predatory microbes which enslave prey to acquire photosynthetic capability are abundant in our oceans. These single-celled planktonic mixotrophs are organisms that combine plant-like and animal-like behaviour within the one cell.

Traditionally mixotrophs are considered as curiosities or irrelevant. However, an international team, funded by the Leverhulme Trust, has, for the first time, mapped the presence of these “body-snatching” mixotrophs which shows that they are present in oceans all over the world.

These “body-snatchers” come in two forms. One type steal the photosynthetic factories from their prey during digestion and use these chloroplasts to make food as do plants. Other mixotrophs enslave whole photosynthetic prey communities within their body, drifting in the oceans like microscopic green houses. Marine researchers have been mislabelling 50% of these organisms as “animals” when they are actually eating and photosynthesizing within the one cell. The good body-snatchers support fisheries, while the bad ones can be highly toxic.

Suzana Leles, PhD student and first author of the research said “A biogeographical analysis of approximately 100,000 records showed that different types of these mixotrophs dominate different parts of our oceans during different seasons.”

Dr Mitra said: “Over the last 5 years we have worked as an international network exploring the importance of mixotrophy in global oceans. Our findings broaden the scope of the new mixotroph-centric marine paradigm that we have proposed. This has the potential to overturn a centuries worth of understanding of marine ecology and we need to take mixotrophs more seriously and include their remarkable impacts in mathematical models used to predict climate change and aid environmental management.”