When we think of an architectural project, we have in mind its structure and especially the design. The architect’s drawing most often surprises us in every way, especially sight. However, several times the acoustic factor is left aside because it is not tangible and visual, which ultimately undermines the final design. The designed environment should propagate the sound clearly and intelligibly, but this is only possible when specialists are on the team. An environment with poor acoustics may be considered unusable for large events such as auditoriums and concert halls. It can get very bad and cause a very poor impression of the establishment if the acoustics is poor.
This concern with acoustics is historically consolidated. The great churches and theaters of antiquity possessed the perfect acoustics, for they were designed in a way to reverberate the sound without causing echoes. The sound waves arrived intelligibly in the ears of the spectators, especially in the open air theaters. With the advent of theaters indoors, the public had to stay very close to the artists to be able to hear what was being said. In this, the galleries were created that allowed better vision and hearing. However, to accommodate many viewers, theaters, churches and concert halls must heed other acoustic problems, such as echoes, lack of clarity and gain.
To deal with these problems, both the architect and the interior designer and the acoustical engineer must work together from the initial design of the environment! Only then can the environment be acoustically comfortable and avoid these acoustic problems. This is especially true for venues that serve a large number of people, such as amphitheaters, and conference rooms and others already cited.

The main factor for those who want to create an ideal environment is to understand the sound reverberation time and that several other technical parameters depend on it. By using reflective surfaces and suitable materials that allow the sound to be projected to the audience, you get a sense of intimacy with whoever is speaking, even with the musicians on stage. An environment full of absorption materials does not offer this kind of experience. In this case the listener feels more isolated and emotionally excluded. The ideal reverb depends on the volume of the room and the purpose of using the space, basically. To do so, the potential for sound absorption with or without people is estimated by selecting suitable coating materials for the environment.
Reverberation is, in short, the form in which sound propagates. That is, when a sound encounters obstacles such as walls or even objects and returns, this return is so immediate that the human ear can not perceive the difference between the original sound coming from the speaker and the reflection coming from the wall. The sound intensity in a given environment decays according to the distance and according to the number of times that sound wave hits the material. “More acoustic” materials absorb the sound wave more, and reflect little of this sound, absorbing much of it. But understand that it is important to use “less acoustical” materials, since your goal may be to achieve greater range of sound in a large location without using a large electroacoustic system (loudspeakers).

But what is the difference between reverb and echo? Since it has the same form of production as the reverberation of sound, the echo is perceived by us as a delay between the original sound and the reflected sound. Just like when you scream on the mountain and she answers you. The echo is not favorable for environments, because it makes the intelligibility of the sound is impaired. Therefore, to avoid echoes, it is necessary to identify the surfaces that produce the same and to act in two ways: using objects or materials that block the surface causing the echo, and thus the reflected sound arrives faster to the listener; or a “more acoustic” absorption material can be placed on that surface which generates the echo. 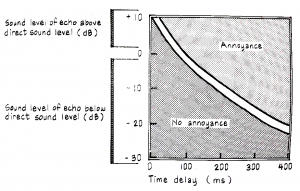 See the diagram above, taken from Egan’s book, Architectural Acoustics, where he identifies the region that causes annoyance (annoyance). For this to happen, most likely the echo level is greater than the original sound level coming directly from the sound source. Or, the delay between the original sound and the echo is large, therefore noticeable. If the delay is small between the two sounds, we do not feel bothered by this “echo” and it is perceived as a reverberation. This reverberation is also known as reverbby musicians (which is actually even desirable). 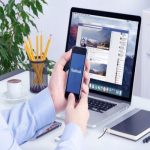