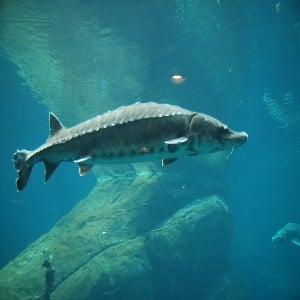 The sharks , rays and chimeras (deep-sea fish, also called rat fish) of this class (from the Greek chondros = cartilage + ichthys = fish) are the most primitive living vertebrates with complete and separate vertebrae, movable jaws and even fins.

This group is ancient and represented by numerous fossil remains. They belong to some of the largest and most efficient marine predators. All have a cartilaginous skeleton, specialized teeth that are renewed throughout life and a skin thickly covered by tooth-shaped scales.

Almost all are marine, although there are species of sharks and rays that regularly penetrate estuaries and rivers, and, in tropical regions, freshwater species.

All cartilaginous fish are predators, although the phytoplankton also ingest phytoplankton. In this case there are rigid projections of the gill arcs, which function as filters. Much of their diet is made up of live prey, although they eat corpses when available.

Bony fish are the largest group (corresponding to 9 out of 10 species) and diverse fishes present. These animals inhabit all types of water, sweet, brackish, salty, hot or cold (although most are limited to temperatures between 9 and 11ºC). This is the most recent class from a phylogenetic point of view as well as considered more evolved. The taxonomy within this class has often been altered, due to the discovery of new species, as well as of new relations between the already known ones.

Typically the bony fish are not larger than 1 m in length but there are reduced forms (certain gobies are only 10 mm long) and gigantic (swordfish with 3.70 m, sturgeon with 3.80 m and 590 kg of weight or fish -Water with 900 kg weight).

They have adapted to live in sometimes difficult conditions, such as lakes at high altitude, polar zones, hydrothermal vents, puddles with high salinity or poor in oxygen, etc.

Many fish periodically migrate from site to site or from deep water to the surface, both for spawning and feeding.

Its main features include a body, taller than wide and oval in silhouette, which facilitates movement through the water.

The head extends from the tip of the muzzle to the opening of the operculum, the trunk from there to the anus, behind which is the tail. The body has a strong segmental musculature – myomeros -, separated by delicate connective septa.

The skeleton is formed by true bones, although some species may have cartilaginous bones (sturgeon, for example), with numerous distinct vertebrae, although notochord is persistent in the intervertebral spaces.

The skeleton has 3 main parts: spine , skull and rays of the fins . The ribs and the pectoral girdle (there is no pelvic girdle, connecting these fins by means of tendons, without attachment to the spinal column). Numerous other small bones support the rays of the fins.

The main differences between bony fish and cartilaginous fish

We can classify the fish into two large groups that are quite different from one another: condrictes (cartilaginous fish) and osteitis (bony fish). Despite some glaring differences, it is common to make mistakes by differentiating the two groups. The following are the main differences between a cartilaginous fish and a bony fish. It is worth noting that we can find some representatives that do not follow the rules below.

Another striking difference is the gills. The bony fish have a membrane that covers the gill slits, while the cartilaginous fish have their gills exposed, without any protection.

Scales can also be used to differentiate these two groups. While cartilaginous fish have placoid scales and dermal and epidermal origin, bone fish have scales of exclusively dermal origin.

By observing the mouth, you can also see a difference. While the cartilaginous fish have a ventral mouth, the bony fish present their mouth in the anterior region of the body.

The bony fish present, among other characteristics, the presence of operculum

Reproduction is also an important factor. While bony fish have external fertilization, the cartilaginous ones have a structure called the clasper, which acts to aid in internal reproduction. The clasper is a modified pelvic fin which helps in the introduction of spermatozoa. Besides this difference, we can highlight the fact that in the cartilaginous fish there is no larvae appearing, whereas in the bony fish there is a larva that later develops and forms the fry.

We can also notice that cartilaginous fish have cloaca, differently from bony fish.

Another difference concerns the swim bladder, a structure that assists in the flotation of the fish. This structure is found only in bony fish.

We can mention as examples of cartilaginous fish the shark, ray and the cation. Among the bony fish, we can mention the catfish, painted and carp.