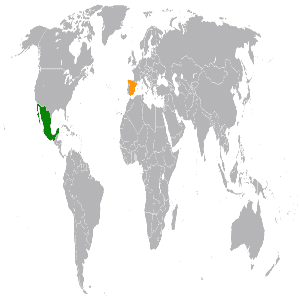 Mexico and Spain share close and affectionate diplomatic relations today. On several occasions, the two countries have supported each other diplomatically and there have been several high-level visits and meetings between the two governments, including the Spanish Royal Family . Shortly after reestablishing diplomatic relations in 1977; Spanish President Adolfo Suárez paid an official visit to Mexico, the first of a Spanish head of government. That same year, in October of 1977, the Mexican president Jose López Portillo made an official visit to Spain.  The relationship between the two countries continues to be based on deeply rooted cultural similarities, such as Spanish surnames and a shared linguistic heritage.

Located in the southern part of North America

Located as much to the south of Western Europe as to North Africa . In Europe it occupies the greater part of the Iberian peninsula , known as peninsular Spain , and the archipelago of the Balearic Islands (in the western Mediterranean sea ); in Africa are the cities of Ceuta (on the Tingitana peninsula ) and Melilla (in the Cabo de Tres Forcas ), the Canary Islands (in the northeastern Atlantic Ocean),the Chafarinas islands ( Mediterranean Sea ), the rock of Vélez de la Gomera ( Mediterranean Sea ), the islands of Alhucemas (Gulf of the Alhucemas ), and the island of Alboran ( Alboran Sea ).

It has an area of ??505 370 km² ,  being the fourth largest country on the continent , after Russia , Ukraine and France

Politically it is a democratic , representative and federal republic composed of 32 states

A sovereign country , member of the European Union , constituted in social and democratic State of right and whose form of government is the parliamentary monarchy . the king exercises the function of head of State under the control of the legislative power ( parliament ). Yes the country has a royal family.The House of Bourbon-Anjou (or simply House of Bourbon-Spain) is the current Spanish Royal Family.

In the country, illiteracy levels have dropped significantly in the last 40 years, from 25.8% in 1970 to 8.4% in 2005,  which places the country close to achieving the Goals Millennium Development Goals in the area of ??literacy according to SEP and UNESCO . The illiterate population was 7.3% in 2010 ,  although it is estimated that there are 33 million (29% of the population) of functional illiterates in the country.

Mexico is a country with a great climatic diversity. The geographical situation of the country places it in two distinct areas, separated by the Tropic of Cancer . This parallel divides the country into two zones whose climates would be clearly distinct (a tropical and a temperate zone) were it not for the fact that the relief and the presence of the oceans influence much the configuration of the map of the climates in the country .In this way, in Mexico it is possible to find cold climates of high mountain to about how many hundreds of kilometers of the hotter climates of the coastal plain.The warm rainy zone comprises the low coastal plain of the Gulf of Mexico and the Pacific. In this region temperatures range between 15.6 ° C and 40 ° C. A warm zone comprises the lands located between 614 and 830 meters above sea level. Here, temperatures range from 16.7 ° C in January to 21.1 ° C in July. The cold zone goes from the 1830 msnm of altitude to the 2745 meters

As it goes inland, the climate is more extreme because it is the continental Mediterranean climate, which covers most of the Peninsula, low temperatures in winter, high in summer and irregular precipitation (depending on the geographical position) . Usually, Western communities receive more rainfall than the eastern ones. Thus, Galicia and the Bay of Biscay have an oceanic climate characterized by abundant rainfall throughout the year especially in winter and cool temperatures.