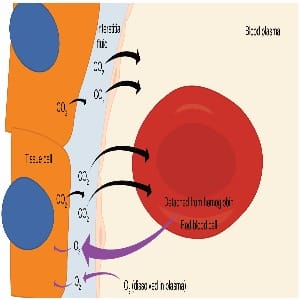 Internal respiration also known as  cellular respiration is the set of biochemical reactions why particular organic compounds are completely degraded by oxidation , to become inorganic substances, a process that provides useful energy for the cell (mainly in the form of ATP ).

The oxygen that, like any gas, crosses without obstructing the biological membranes , crosses first the plasma membrane and then the mitochondrial membranes , being in the matrix of the mitochondria where it is united to electrons and protons (that add up constitute atoms of hydrogen ) forming water . In that final oxidation, which is complex, and in previous processes the energy required for the phosphorylation of ATP is obtained .

In the presence of oxygen, the pyruvic acid , obtained during the first anaerobic phase or glycolysis , is oxidized to provide energy, carbon dioxide and water. This series of reactions is known as aerobic respiration.

The glycerine (glycerol) formed in the lipolysis of triglycerides incorporated into glycolysis at the level of glyceraldehyde 3 – phosphate .

The oxidative deamination of certain amino acids also yields pyruvate; which have the same metabolic fate as that obtained by glycolysis.

Pyruvic acid enters the mitochondrial matrix where it is processed by the enzymatic complex pyruvate dehydrogenase , which carries out the oxidative decarboxylation of pyruvate; decarboxylation because starts one of the three carbons of pyruvic acid (which appears in the form of CO 2 ) Oxidative because, simultaneously tear off two atoms of hydrogen (oxidation by dehydrogenation ), which are captured by the NAD + , which is reduced to NADH . So; pyruvate is transformed into a radicalacetyl (-CO-CH 3 , acetic acid without the hydroxyl group ) which is taken up by coenzyme A (which passes to acetyl-CoA ), which is responsible for transporting it to the Krebs cycle.

The Krebs cycle is a cyclic metabolic pathway that is carried out in the mitochondrial matrix and in which the two acetyls transported by acetyl coenzyme A from pyruvate are oxidized to produce two CO 2 molecules , releasing energy in usable form, ie reducing power ( NADH , FAD H 2 ) and GTP .

Two complete turns of the Krebs cycle occur for each glucose, since two molecules of acetyl coenzyme A had been produced in the previous step; thus gaining 2 GTPs and releasing 4 molecules of CO 2 . These four molecules, together with the oxidative decarboxylation of pyruvate, make a total of six, which is the number of CO 2 molecules produced in aerobic respiration (see general equation).

They are the last stages of aerobic or anaerobic respiration and have two basic purposes:

These two phenomena are closely related and mutually coupled. They occur in a series of enzymatic complexes located (in eukaryotes ) in the internal membrane of the mitochondria ; four complexes perform the oxidation of the aforementioned coenzymes by transporting the electrons and harnessing their energy to pump protons from the mitochondrial matrix to the intermembrane space. These protons can only return to the matrix through the ATP synthase , the enzyme that fail the electrochemical gradient created for phosphorylating the ADP to ATP , a process known as oxidative phosphorylation .

In this process no oxygen is used , but another different oxidizing substance such as sulfate or nitrate . In bacteria with anaerobic respiration there is also an electron transport chain in which the reduced coenzymes are reoxidized during the oxidation of the nutrient substrates ; is the analog of aerobic respiration , since it is composed of the same elements ( cytochromes , quinones , proteins ferrous sulphides, etc.). The only difference, therefore, lies in the fact that the ultimate electron acceptor is not oxygen.

All possible acceptors in anaerobic respiration have a lower reduction potential than O 2 , so that, starting from the same substrates ( glucose , amino acids , triglycerides ), less energy is generated in this metabolism than in conventional aerobic respiration .

Anaerobic respiration should not be confused with fermentation , in which there is no electron transport chain at all , and the final electron acceptor is an organic molecule ; these two types of metabolism have only in common not being dependent on oxygen.

The following table shows different electron acceptors of their products and some examples of microorganisms that perform such processes:

Use of nitrate as an electron acceptor

Many bacteria anaerobic contain the enzymes nitrate reductases that catalyze the reduction of nitrate to nitrite :

However, the resulting product (nitrite) is very toxic so some species of Pseudomonas and Bacillus can reduce nitrate beyond the level of nitrite, to molecular nitrogen :

The end result, nitrogen, is an inert and non-toxic gas . This process is known as denitrification which, if produced in the soil is considered harmful to agriculture as it causes the loss of nitrates, necessary for the growth of plants.

Nitrate-reducing bacteria are facultative anaerobes since the use of nitrates and nitrites as electron acceptors are alternative processes that can be used by these bacteria to grow in the absence of oxygen. In the presence of it, although nitrate is present, respiration proceeds entirely through the aerobic chain of electron transport.

Use of sulfate as an electron acceptor

Diagram of the corrosion in anaerobic conditions caused by bacteria of the genus Desulfovibrio.

The use of sulfate as an electron acceptor is a rare ability, restricted to the genus Desulfovibrio and some species of Clostridium . All these bacteria are strictly anaerobic , so the reduction of sulfate is not an alternative of their metabolism, as is the reduction of nitrate. The reaction is as follows:

Sulphate-reducing bacteria attack only a few organic compounds , with lactic acid and 4- carbon dicarboxylic acids being its main substrates.

Use of carbon dioxide as an electron acceptor

A small group of strict anaerobic prokaryotes , methane-producing archaea , use carbon dioxide as an electron acceptor; the reduction leads to methane (CH 4 ). The simplest case is the oxidation of molecular hydrogen , energy-producing reaction:

Hydrogen is not a common gas in the biosphere , so that these microorganisms inhabit very specific places as in anaerobic sediments of lakes and marshes , or in the digestive tract of ruminants , where other microorganisms produce the free H 2 they need .

Use of ferric ion as an electron acceptor

Ferric ion (Fe 3+ ) can be used by several bacteria as an electron acceptor, reducing it to ferrous ion (Fe 2+ ); this process is carried out by many microorganisms that reduce nitrate. The ferric ion is found in soil and rocks, often forming ferric hydroxide (Fe (OH) 3 ) insoluble; under anaerobic conditions, these bacteria can reduce it to the ferrous state. The ferrous ion is much more soluble than the ferric, whereby the iron is mobilized, this being an important first step in the formation of a type of mineral deposit called marsh iron . 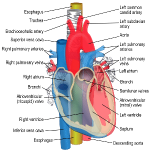 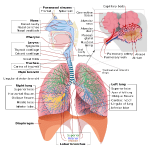