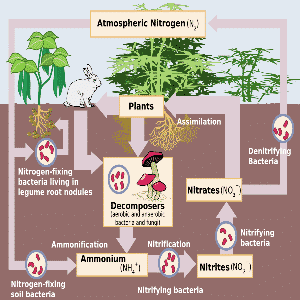 Among the biogeochemical cycles, that of nitrogen is the most widely studied. Find out why 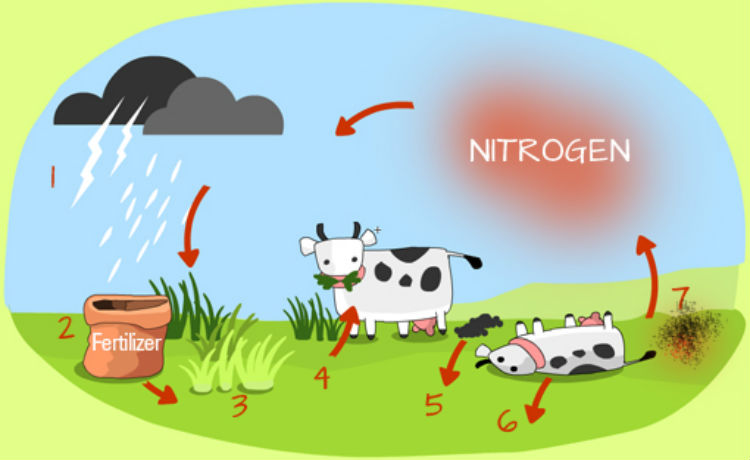 Nitrogen is an essential chemical element for the existence of life on Earth, since it is a component of all the amino acids in our body, besides the nitrogenous bases (which constitute the molecules of DNA and RNA). Approximately 78% of the air we breathe is composed of the nitrogen of the atmosphere (N 2 ), which is its largest reservoir. One of the reasons for this is that N 2 is the inert form of nitrogen, that is, it is a gas that, in common situations, is not reactive. Thus, it has been accumulating in the atmosphere since the formation of the planet. Despite this, few living beings have the capacity to absorb it in its molecular form (N 2). It turns out that nitrogen, like iron and sulfur, participates in a natural cycle along which its chemical structure undergoes transformations in each of the stages, serving as the basis for other reactions and thus becoming available to other organisms – this is the importance of the nitrogen cycle (or “nitrogen cycle”).

For atmospheric N 2 to reach the soil, entering the ecosystem, it must undergo a process called fixation, which is carried out by small groups of nitrifying bacteria, which withdraw the nitrogen in the form of N 2 and incorporate it into its organic molecules. When fixation is performed by living organisms, such as bacteria, it is called biological fixation, or biofixation. Nowadays, fertilizers can also be used commercial applications for nitrogen fixation, characterizing the industrial fixation, a method widely used in agriculture. In addition to these, there is also the physical fixation, which is performed by electric rays and sparks, through which nitrogen is oxidized and charged to the soil through rainfall, but such a method has a reduced capacity of nitrogen fixation, which is not sufficient for organisms and life on Earth to remain.

The bacteria, when fixing N 2 , release ammonia (NH 3 ). Ammonia, when in contact with soil water molecules, forms ammonium hydroxide which, upon ionization, produces ammonium (NH 4 ) in a process called ammonification. In nature, there is a balance between ammonia and ammonium, which is regulated by pH. In environments where the pH is more acidic, the formation of NH 4 predominates , and in more basic environments, the most common process is the formation of NH 3. This ammonium tends to be absorbed and used mainly by plants that have bacteria associated with its roots (bacteriol rizas). When produced by free-living bacteria, this ammonium tends to become available in the soil for use by other bacteria (nitrobacter).

Nitrobacter are chemosynthesizers, that is, they are autotrophic beings (which produce their own food), which extract the energy necessary for their survival from chemical reactions. To obtain this energy, they tend to oxidize the ammonium, transforming it into nitrite (NO 2 – ), and later into nitrate (NO 3 – ). This process is called nitrification.

Nitrate remains free in the soil, and has no tendency to accumulate in naturally intact environments, allowing it to travel three different paths: being absorbed by plants, being denitrified, or reaching bodies of water. Both denitrification and the flow of nitrate to water bodies have negative consequences for the environment.

Impacts on the environment

Denitrification (or denitrification) is a process carried out by bacteria called denitrifiers, which transform the nitrate into N 2 again, returning the nitrogen to the atmosphere. Besides N 2 , other gases that can be produced are nitric oxide (NO), which combines with atmospheric oxygen, favoring the formation of acid rain, and nitrous oxide (N 2 O), which is an important causative gas of the greenhouse effect, which worsens  global warming .

The third path, which is where nitrate reaches water bodies, causes an environmental problem called eutrophication . This process is characterized by increased nutrient concentration (being nitrogen compounds and phosphorus, mainly) in the waters of a lake or dam. This excess of nutrients favors the accelerated multiplication of algae, which ends up hindering the passage of light, unbalancing the aquatic environment. Another way to provide this excess of nutrients in an aquatic environment is to release into it sewage without proper treatment (click  here to learn more about the consequences and control of eutrophication).

Another issue to be considered is the fact that nitrogen can also be harmful to plants when present in quantities that go beyond their assimilation capabilities. Thus, an excess of nitrogen fixed in the soil can limit the growth of the plant, damaging crops. Thus, the  carbon / nitrogen ratio must also be considered in composting processes  , so that the metabolisms of the microorganisms colonies involved in the decomposition process are always kept active.

Humans and other animals have access to nitrate from the intake of plants that have absorbed that substance or, according to the food chain, from the ingestion of other animals that have fed on these plants. This nitrate returns to the cycle after the death of some organism (organic matter) or the excretion (of urea or uric acid, in the majority of terrestrial animals and of ammonia, in the excreta of the fish) that presents / displays nitrogen compounds. Thus, decomposing bacteria will act on the organic matter releasing ammonia. Ammonia can also be transformed into nitrites and nitrates by the same nitrobacteria that transform ammonium into the cycle.

An alternative to fertilizers

As we have seen, the fixation of nitrogen in the soil can produce positive effects, but the process occurs in excess, can generate negative consequences for the environment. Man interferes in the nitrogen cycle by the industrial fixation (through the use of fertilizers), which increases the concentration of nitrogen to be fixed, causing problems such as those mentioned above.

An alternative to the use of fertilizers would be the rotation of crops, alternating crops of nitrogen fixing and non-fixing plants. Nitrogen-fixing plants are those that have bacteria and other fixing organisms associated with their roots, as in leguminous plants (such as beans and soybeans). Rotation would favor nitrogen fixation in safer amounts than the use of fertilizers, providing nutrients compatible with the assimilation capacity of plants, favoring their development and reducing the rates of nutrients that reach water bodies. A similar process called “green manure” can also be applied instead of fertilizers.

This process consists in cultivating nitrogen-fixing plants and brushing them before they produce seeds, leaving them in place as mulch, so that later crops of other species are made. Below we can see an image that gives us a summary of what has been seen throughout the story.

The acronym  (which means anaerobic ammonia oxidation) names an innovative biological process of removing ammonia from water and gas.

It consists of a shortcut since the ammonia need not be nitrified in nitrite and nitrate to be denitrified back to the N 2 form . With the ANAMMOX process, the ammonia would be directly reconverted into nitrogen gas (N 2 ). The first large-scale station was installed in 2002 in the Netherlands, and in 2012, there were already 11 installations in operation.

Efficient and sustainable, the ANAMMOX process can be used to remove ammonia in effluent at higher concentrations up to 100 mg / l. Within the reactors, nitrifying bacteria and ANAMMOX coexist, where the former transform about half of the ammonia into nitrites (chemical compounds that have nitrogen in their composition), and the ANAMMOX bacteria act by transforming the nitrites and ammonia into nitrogen gas. 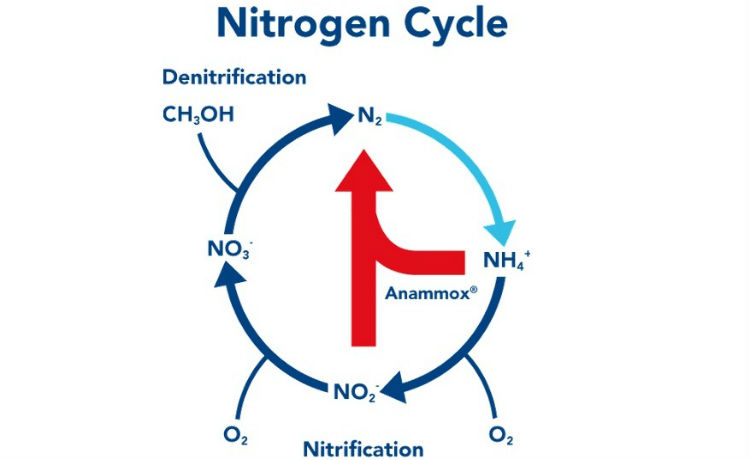 Anaerobic oxidation of ammonia has been shown to be promising and can already be found in industrial processes such as wastewater treatment, organic solid waste, food industries, fertilizers, among others. 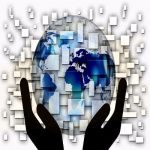 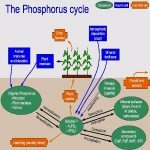