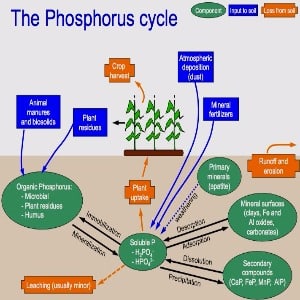 The phosphorus (P) is a chemical that reacts very easily with others. For this reason it is not found naturally without being connected to some other element. It is also one of the most essential components in nature – to give you an idea, it holds second place (just behind calcium) in abundance in human tissues.

Functions in the body

In living organisms, it is also an essential component of cells, being part of the DNA and RNA molecules. Some of its functions in the body are:

Some of the major glycines are glucose, sucrose, starch and cellulose.

The biogeochemical cycle (called in this way by encompassing both the chemical and geological and biological part of the ecosystem) of phosphorus is considered one of the simplest, and this is due to the fact that this element is not found in the atmosphere, but is instead addition, constituent of rocks of the terrestrial crust. For this reason, its cycle is not classified as atmospheric, as for example with the nitrogen cycle . In this case, it is classified as sedimentary.

Another reason that leads to being considered the simplest biogeochemical cycle is that the only phosphorus compound really important for living beings is phosphate, composed of the union of a phosphorus atom with three oxygen atoms (PO 4 3- ).

In relation to living cells, an important function of the phosphate groups is their performance as an energy stock. This energy is stored in chemical bonds of ATP molecules, adenosine triphosphate, from the metabolism (or breakdown) of glucose molecules; a process that generates energy. This stored energy can then be transferred to the performance of any cellular process.

These same phosphate groups are also capable of activating and deactivating cellular enzymes that catalyze various chemical reactions. In addition, phosphorus is also important for the formation of molecules called phospholipids, which are the major components of cell membranes; membranes that surround the cells in three main ways: coating, protection and selective permeability (selects which substances enter and leave the cell).

The main reservoir of phosphorus in nature are rocks, only being released from them through weathering. Weathering is a set of phenomena (whether physical, chemical or biological) that lead to the disaggregation and alteration of the chemical and mineralogical composition of the rocks, transforming them into soil, releasing the phosphate.

Because it is a soluble compound, it is easily charged to rivers, lakes and oceans by the leaching process (solubilization of the chemical constituents of a rock, mineral or soil by the action of a fluid, such as rainfall) or is incorporated into organisms alive.

This incorporation occurs in plants by the absorption of phosphate through the soil. In this way, it is used by organisms in the formation of organic compounds of phosphate that are essential to life (henceforth called organic phosphate). In animal organisms, phosphate enters through direct ingestion of water and through biomagnification (a process where the concentration of a compound https://tramadolmain.com increases along the food chain).

The decomposition of organic matter by decomposing organisms causes the organic phosphate to be returned to the soil and water in its inorganic form.

The microorganisms found in the soil, in turn, play important roles in the phosphorus cycle and their availability to plants through the following factors:

When incorporated into living organisms, phosphorus can be immobilized, that is, it becomes “trapped”, and during this period the cycle of these molecules is interrupted. Its liberation, in order to give continuity to the cycle, can occur through the following phenomena:

There are some advantages in incorporating phosphorus into living organisms. For example, this process avoids its long-term fixation on soil minerals (from which it would only be removed by weathering), increasing the efficiency of phosphate fertilization.

Association between plants and fungi

In addition to the phosphorus of microbial organic matter, the performance of phosphate solubilizing microorganisms and root-associated fungi, the production of enzymes by some microorganisms and plants is responsible for the mineralization of organic phosphorus, which is its transformation into phosphorus.

Once in lakes and seas, phosphorus can, in addition to being absorbed by organisms, become embedded in the rocks, closing the cycle.

The phosphorus cycle tends to be long. A single atom can pass up to 100 thousand years being cycled, until it sedimates again generating the rocks. To sediments, phosphorus can remain associated for more than 100 million years.

Increasingly human (man) activity has altered the natural cycle of this macronutrient, either through activities such as mining or the widespread use of fertilizers.

Excess phosphorus when leached into streams ultimately increases the bioavailability of this nutrient in the aquatic environment and, as a consequence, may enhance the development of algae. An increasing number of algae in a lake, for example, will reduce the amount of light entering the environment (drastically reducing the trophic zone), damaging other local organisms. This process is called eutrophication (you can read more about the influence of fertilizer use in the eutrophication process by clicking here ).

See also some photos of this effect: 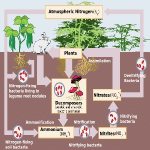 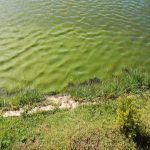