Energy is a concept related to the idea of ??capacity or strength to achieve something. According to the field of study, the concrete meaning may vary but is always linked with this capacity for action . In physics, classical mechanics defines energy as work capacity and argues that the amount of energy contained in a closed system is always the same, remains constant, but can be transformed into different forms or types and can be transferred from a particle to other.

The kinetic energy (designated as E c ) is that which possesses a body in motion. This concept, which appears from classical mechanics to quantum mechanics, is defined as the work that must be done to carry a particular from zero speed (resting state) to its current speed and is equal half of its mass per the speed squared:

By applying this energy on the body, it accelerates until it reaches the indicated speed and once it reaches the body it maintains the same kinetic energy unless the speed changes. In order for the body to return to a resting state, work of the same magnitude must be applied, but in the opposite direction. The kinetic energy is, in addition, expansive, reason why can be obtained comma the sum of the kinetic energy of each particle that composes a system.

Potential energy is what a body possesses due to its position or configuration within a conservative force field , which is characterized because the total work done by the field for a particle to perform a movement in a closed path is equal to zero , for example, a planetary orbit. That is, the total work to change the system from a certain configuration to return to the same configuration is zero regardless of the path followed, so the work depends only on the initial and final state .

To explain the concept of potential energy, we usually resort to thinking of it as the energy that a particle stores when changing its position within a conservative force field. In order for the particle to pass from point A to point B, a work must be applied to the particle. The energy of this work is transferred to the participant and transformed into potential energy. To return from point B to point A, the same work must be applied in the opposite direction, so the total work in the closed path, whatever the path followed, is equal to zero.

Under the conditions of a conservative field, the potential energy is defined as:

From which it follows that the applied force from point A to point B is equal to the inverse gradient between the points of the force field:

There are three types of conservative fields and three associated potential energy types:

To visualize how kinetic energy and potential energy are two forms of mechanical energy, we can give the classic example of lifting a stone from the ground against the force of the gravitational field. The potential energy of the stone is given by its mass, the force of gravity and height:

Where U g is the gravitational potential energy, m is the mass of the body, g is the force of gravity and h is its height (distance to the center of mass between the Earth and the stone or center of gravity).

To lift the stone we will have to apply a work with a force superior to the force of gravity but in the opposite direction. By applying this force on the stone, we transfer the energy that is transformed into kinetic energy so that the stone moves upwards. We continue applying the force until reaching 1 m of height and we stop the stone. Now the kinetic energy becomes zero and is transformed into gravitational potential energy that is stored in the stone.

If we now release the stone and let it fall freely, the stored gravitational potential energy is transformed back into kinetic energy and the stone falls to the point of departure, at which time it will have the same total energy as before lifting it. 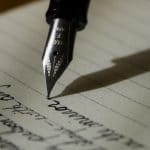