Between these two great civilizations of pre-Columbian America we can find many similarities (agricultural, warrior, conquering, polytheistic, scientifically advanced, lovers and preservers of nature) and differences, both cultures being destroyed by the Spanish conquest.

Among its differences we can mention:

Location : the Aztecs settled in the current Mexican territory, in its southern and central zones. The Incas occupied a more extensive territory between the southern sierras of what we now call Colombia to the north of present-day Chile and Argentina, and from the Pacific to the east of the Amazon River. 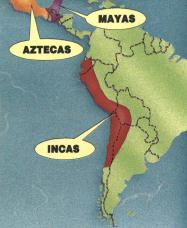 Characteristics of the area : the Aztec land was swampy, that of the Incas was arid and mountainous.

Cultivation techniques : the Aztecs used the technique of chinampas, because their soil required it, being too humid. Recall that the technique of chinampas consisted of building species of rafts on the lakes to cultivate on them. The Incas, due to their climate and relief, had to use cultivation terraces, making steps in the mountains, to retain the water as much as possible, a natural element that was extremely scarce.

Language : among the Aztecs Nahuatl was called, the Incas the Quechua

Religion : both were polytheists and practiced human sacrifices. In both the main god was the sun, called Huitzilopochtli among the Aztecs, and Inti among the Incas. The Aztecs were more cruel in their rituals.

Science : Both peoples excelled in medicine, astronomy and mathematics

Society : Both Aztec and Inca possessed a society ordered in hierarchies, the nobility being the most important sector Among the Aztecs the most recognized were military leaders, priests and civil servants, who were part of the Pipiltin class; while the rest were part of the common people called macehualtin. The Incas differed between the nobles (the Inca and the provincial chiefs) who were the most powerful. Then he was followed by lower-ranking officials and artisans. A little lower were the peasants who owned land assigned to work by the curacas and finally there were the yanas, servants.

Political authorities : The highest Aztec authority was the emperor, and the Inca the Inca, both with absolute powers.

Political center : The Aztec capital was called Tenochtitlan, that of the Incas, Cuzco.