Although before Aristotle other thinkers had dealt with aesthetics , philosophers of the stature of Gorgias, Democritus or Plato did it, in addition to the artists themselves, no one before the Stagirite had done so systematically , as we said in an article earlier, it was one of its fundamental features. Aristotle was extremely meticulous and his methodology was very careful. Which is why, according to Kant, he managed to channel aesthetics in the path of knowledge. And although it is risky to say where a science begins, it seems clear, using an analogy, that we can assure that the story begins in Aristotle , just as we speak of an a. C and d. C., we could also do the same in your case. 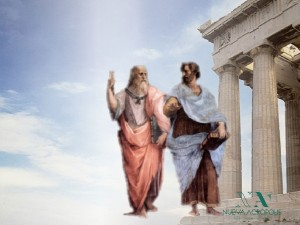 We can not forget that Plato was Aristotle’s teacher, and this is the most outstanding student, so it is normal that we find a certain affinity between Platonic and Aristotelian observations and that his theories converge on many points. However, it does not seem fair to assure, as it has ever been done, that Aristotle’s aesthetics was a copy of that of his teacher, or at least that he does not contribute anything new with respect to that of his predecessor.

However, there are considerable differences between the views of the Athenian and those of the Stagirite.

1. The most fundamental, at least in my opinion, is based on the dissociation with the metaphysics that Aristotle carried out . Remember that for Plato art should be governed by the Idea of ??good, belonging to that world of ideas that had been designed.

2. On the other hand, systematized at the same time that it transformed some of the Platonic aesthetic ideas , developing some that in Plato were not more than sketches and simple allusions.

Aristotle was a magnificent observer of what was happening in his time, an observation he used to enrich his texts and elaborate his theories . Thus, his aesthetic conception of poetry drinks directly from Sophocles and Euripides, from the greatest poets of antiquity; and that of the painting of Polignoto and Zeuxis. Regarding the sculpture, Phidias and Polícleto were its referents. In short, the Aristotelian aesthetic was influenced by the great artists, already consecrated.

In any case, it also reflected his personal tastes , as his teacher did. For this reason, we know that only some types of music were to his liking and that the dance was not at all to his liking, rather he despised it.

However, while Plato denounced contemporary art, praising the Greek and Egyptian Archaic, Aristotle used it as a reference . Of course, we must bear in mind that Aristotle was less years than Plato, so what for this is contemporary, for that one was already consecrated art.

So instead of what we saw in Plato, which rejected the art for not corresponding with his theory, in Aristotle we see that treats the works of art and artists consecrated as a fact, as a reality, so he tried to adapt his theory aesthetics to said works of art and said artists.