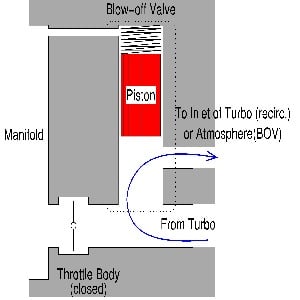 When the sports car carrying the turbo engine runs away, I think that I heard a unique sound like “push” or “push rulurulu …” when the accelerator is off. This is the unique sound of a turbo engine, and the mechanisms that give out such sound are “blow off valve” and “waste gate valve”.

The Turbo engine drives (rotates) the blade-like turbine with the kinetic energy of the exhaust gas, as described above, so that the vane (Compressor) to compress air, push many air into the combustion chamber. With this, it is possible to demonstrate a force more than the displacement due to natural inspiration (NA).

Therefore, it is possible to downsize (because the virtual displacement becomes larger), is not it?

What is the difference between wastegate and blow off?

The wastegate valve is on the exhaust side. As the amount of gas exhausted by the compressor effect increases, turbine rotation increases and supercharging pressure rises. At this time, if the boost pressure exceeds the proper value, it will lead to turbine and engine blowdown.

Therefore, in the case of overcharging over a certain level, the wastegate is responsible for controlling the supercharging pressure by missing part of the exhaust gas in the bypass.

In many turbo cars, this wastegate mechanism is incorporated in the turbocharger body.

Some tuning cars are externally attached, but if exhaust gases are opened to the atmosphere without a catalyst, traveling on the general road is not good. Because it is not legally permitted, attention is necessary.

On the other hand, the blow-off valve is on the intake side.

The blow-off valve is responsible for discharging the compressed air (mainly to the atmosphere).

For vehicles sold by manufacturers, blow off valves are not included, instead of “recycling valves”. This role is the same as blow-off, it is a device to let air escape, but it is designed to return inside the intake pipe in front of the turbine without releasing to the atmosphere.

In this way, although wastegates and blow-offs of similar images, the working fields on the exhaust side and the inspiration side were indeed reverse 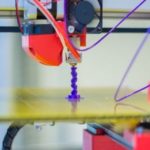 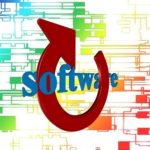