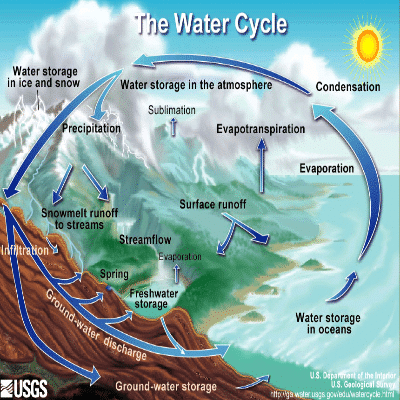 What is the water cycle

The water cycle is a terrestrial cycle (our planet is the only one in the Solar System in which water exists in the three states: solid , liquid , and gaseous ) that consists in the exchange of water between different parts of the Earth: the atmosphere , the hydrosphere (all the liquid components of the Earth: river , sea …) and the soil (the lithosphere). Much of the water in the earth is blocked in the rocks, only about 5% of the water can be moved, that five percent gives rise to the water cycle and allows life.

The water of the lakes , rivers , and especially of the oceans and the seas , heated by the sun evaporates, is what is called evaporation . Some types of vegetation (for example, the forest ) also give off water due to the evaporation and transpiration of the plants by the leaves. This water then reaches the atmosphere in the form of vapor . Hot, humid air rises. It cools as it rises the drops of water come together to form clouds , is the effect of condensation . This water contained in the clouds falls in the oceans and continents when it rains and snows (precipitations).

Nearly three-quarters of the rainfall falls on the oceans and seas. In this case the water cycle is very short. When water falls on the continents , it runs or infiltrates (infiltration or groundwater flow ). Part of this naturally fallen water is subtracted from infiltration thanks to the plants . The infiltrated water arrives in a more or less long time, to a water course. The water returns to the oceans, the lakes, and it will start again the same way, so it is a cycle that starts every time.

However, part of the infiltrated water is completely trapped by the rocks: it forms the groundwater and is accessible to man by digging a well . This is how the groundwater containing fossil water was formed during the geological history of the Earth.

Water is present in three states during the water cycle:

The importance of the water cycle

Water is well known for being the vital liquid of all human beings, its contribution to the ecosystem and to the life of living beings is immense. Many of the processes that occur within nature, and even the cycles of animals themselves, depend entirely on water.

From ancient times, the importance of taking care of this vital liquid has been understood, since as we know the surface of the planet we inhabit is composed mostly of water, 71%. But of that percentage, 3% is freshwater, which indicates that the remaining percentage is salt water. And as we know, the water that we can consume is the water, which if we think about it, is really very little.

Talking about water and its role in the world lead us, without a doubt, to understand its cycle. Since we were little in school they explained the water cycle or as it is also known as “Hydrological Cycle” and that it consists of the following phases: evaporation, condensation, precipitation, infiltration, runoff, underground circulation, fusion and last solidification. The wonderful thing about the water cycle is that it is continuous and that allows human beings and other living beings to enjoy the benefits of it.

Now, we will explain a little the role of each phase of this cycle, beginning with evaporation. This first phase consists of the fact that thanks to the solar rays that come into contact with water in the liquid state of the seas, rivers, oceans, etc., it begins to evaporate and pass to another state that is gaseous. This phase of the cycle helps us to keep the heat of solar radiation on the planet and thus achieve stable temperatures that allow the life of plants, animals and humans. This evaporated water rises to the atmosphere through the air, once there, the temperature causes this vapor to change shape and condense (second phase). During condensation, what we know as clouds are formed, which reflect sunlight and protect us from it.

After the formation of clouds, the third phase happens, which is precipitation. Which we know as rain or snow. Thanks to this type of precipitation, several things happen on the planet. In colder areas this water freezes and creates ice and glaciers, vital for the existence of many animal life and for the storage of water in the form of ice. Also thanks to the precipitation the fields and fields receive water, which helps the development of agriculture. Another of its benefits is that due to this rain it increases the water levels in rivers, lakes and seas.

When this water coming from the precipitation touches the ground, the fourth phase occurs: infiltration and the fifth (run-off) at the same time. Water infiltration consists of entering the subsoil. This later, it returns to the surface through the rivers, seas, lakes, even thanks to the transpiration of the plants, etc. After this evaporates again and start the cycle again. In the runoff phase, which happens at the same time as the infiltration, but above the ground, that is, here the water stays on the surface. Sometimes in depressions of land, it can form rivers of fresh water, rivers that are part of currents and then reach the sea. After this, the evaporation process happens and the cycle starts again.

Clearly, thanks to the hydrological cycle it is possible for many natural processes of the planet to happen, on which we depend to survive. Do you consider that this natural process is important?

The water cycle is vital for the maintenance of life on Earth. On the one hand, this cycle allows
providing water to all terrestrial ecosystems. The living beings of the ecosystems need water to be
able to live.
The air currents allow atmospheric water vapor to move around the planet and precipitates
anywhere with more or less frequently, even in deserts.
No less important is the fact that the water cycle allows the purification
of terrestrial and aquatic
waters. When evaporating, the water leaves contaminants behind and becomes drinking water.
Without the water cycle, the progressive accumulation of substances harmful to health would be
so great that it would no longer be portable. This does not mean that the water precipitated from
the rain is chemically pure, that is, it is only a mixture of hydrogen and oxygen (H2O) since it
contains other elements dissolved in it, such as nitrogen, carbon or sulfur (azufre.htm). However,
these components contained in water, in its proper measure, are very important for the proper
functioning of a living organism 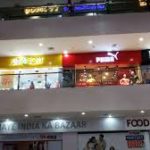 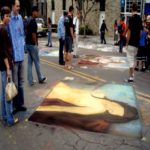