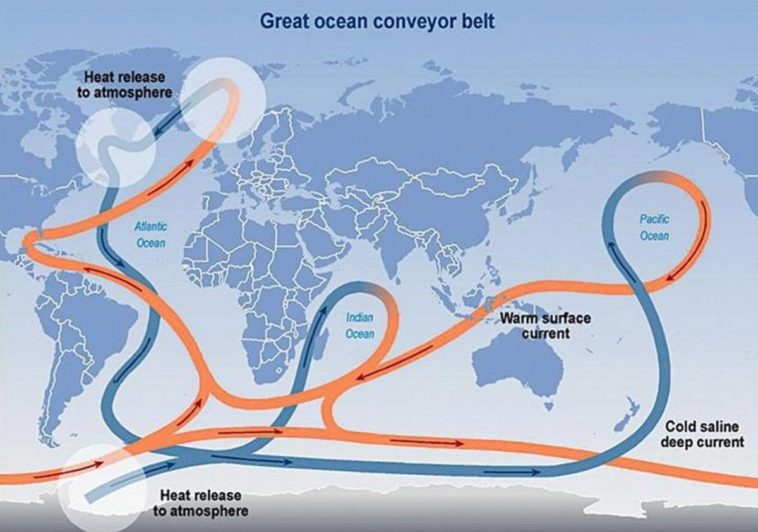 The main system of ocean currents is slowing down. Two different groups of researchers, using different methods, have proven that the mechanism that transports the warm waters of the Caribbean to the north and the cold polar to the south has been failing for decades. Although they do not agree on when the problems began or in the ultimate cause of the failures, they do so in their possible consequences and they are not good. These bodies of water are the true circulatory system of the planet, distributing heat, nutrients and gases.

Neither the tides nor the wind are the main animators of the sea. The influence of the first does not go beyond the coastline and, no matter how hurricane the second, its breath does not feel below the first 100 meters of depth. What really moves the water of seas and oceans in the form of currents is something as basic as what weighs more sinks and what weighs less tends to stay up, density gradients.

In the Atlantic Ocean, the current of the Gulf is an immense mass of warm waters, that is, less dense and heavy, that travel north from the Caribbean, losing heat in the transfer, which tempers the climate of Western Europe. Meanwhile, in the opposite direction, the cold waters of seas such as Labrador, Barents or Greenland still become denser and heavier with the contribution of salt expelled by the advance of Arctic ice. They sink forming the so-called deep water mass of the North Atlantic, which moves southward. Although the system is more complex, these elements are the main arteries of the southern return circulation of the Atlantic (AMOC, for its acronym in English). This is the engine that is failing.

The reduction of the flow would be equivalent to 2.5 times the water that all the rivers of the planet discharge

“The AMOC has weakened in the last 150 years to levels never recorded in more than a millennium,” says the climatologist and co-leader of the Barcelona Supercomputing Center climate prediction group, Pablo Ortega, co-author of one of the studies. The flow would have been reduced, according to estimates, between 15% and 20%. In absolute terms, the flow would have decreased by some three million cubic meters per second. To get an idea, all the rivers in the world discharge about 1.2 million cubic meters per second . “The decrease was very rapid and continues to fall, although at a slower pace,” adds Ortega, who participated in this research when investigating the AMOC in the meteorology department of the University of Reading (United Kingdom).

The flows of the oceanic currents did not begin to be measured systematically until this century, so to determine its flow in the past it is necessary to resort to indirect measurements. In this research, published in the journal Nature , the scientists analyzed the grain size of the sediments of the seabed: the larger, the stronger the currents must have been at that time to drag the finest. Other indirect data were records of water temperatures.

“Our study offers the first comprehensive analysis of the ocean sediment record, showing that this weakening of the AMOC began shortly after the end of the Little Ice Age,” says in a note the researcher from the Woods Hole Oceanographic Institution (USA). ) and co-author of the work, Delia Oppo. This mini glaciation began in the fifteenth century and remained until the nineteenth. What the researchers believe happened then is that the warming caused the melting of large layers of the Arctic region. So much fresh water altered the mechanism of the AMOC as a stopper: by diluting the sea water it reduced its density, slowing down its subsidence, which must have slowed the arrival of the warm waters of the south.

The melting is also the possible causal mechanism pointed out by another group of scientists in their own study on the evolution of AMOC, also published inNature . Like the previous work, here you have found a reduction in the flow of this system of currents of 15%. To obtain their results, they used climate models and available records of surface water temperature, of which data are available since the 19th century, as an indicator of water transfer. What is different is that this work fixes the beginning of the weakening at a more recent date, around 1950, and blames climate change, not at the end of the Little Ice Age, on the upheaval of the system.

“With global warming, the increase in rainfall as well as the melting of Arctic ice and the icy layer of Greenland dilute the waters of the North Atlantic, reducing its salinity, the less saline water is less dense and, therefore, less heavy, which hinders its sinking to the depths “, explains the researcher of the Institute of Geosciences of the Complutense University and the CSIC, Alexander Robinson, co-author of this second work.

Guilt on the sidelines, the consequences of this braking can be many and few good. The AMOC is a central part of the global thermohaline circulation (from Greek, heat and salt) that redistributes the heat of the waters of the planet. “If we situate ourselves in the North Atlantic, and the AMOC weakens, we would have, on the one hand, less hot water going north, which would be colder in the countries of northern Europe,” explains the researcher at the French Institute for the Exploitation of the Sea (Ifremer), the Spanish Patricia Zunino, not related to these two studies. That heat that does not travel to the north would remain in the equatorial zone, further increasing the temperatures in this area, which could increase the frequency and intensity of the hurricanes. 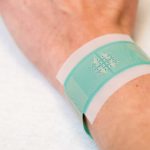 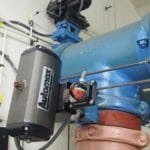