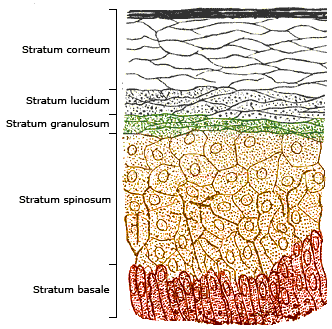 The skin is constituted by three superimposed layers that, from outside to inside, are: epidermis , dermis and hypodermis  (or subcutaneous fatty tissue).

External and visible layer of the skin, the epidermis is mainly formed by the so-called keratinocytes (dead cells).

Continuously replaced by desquamation and replication, new keratinocytes form regularly inside it, which approximately 30 days later reach the surface. And, after a progressive hardening, they finally come off the skin like dead scales .

Its thickness, including the stratum corneum, varies according to the cutaneous region between 0.04 and 0.4 mm, with an average value of 0.05 mm. At its thickest point, for example the soles of the feet, it can have a width of up to two millimeters.

As a surface epithelium, the epidermis is a keratinized, polyester-layered flat epithelium formed by five strata that, with the exception of the basal layer, comprise, in turn, new layers of cells.

The name and order of the strata, from the inside to the surface of the skin, is the following:


The most superficial layer of the epidermis is formed by dead, flat and thin squamous cells that detach continuously, being replaced by others.

The cytoplasm of these cells has been replaced by a hydrophobic protein: keratin .

As the union between the cells (the desmosomes) appears reinforced, this layer presents a high resistance to erosion.

The process by which the deeper cells of the epidermis fill with keratin and move towards the surface of the skin is called keratinization.

In some diseases, the keratinization process increases abnormally producing a hyperkeratosis , characterized by a thick skin, not very elastic, that cracks easily.

This barrier weakens when the skin is exposed to water for a long time.

Also called transparent layer, it is found only in the thickest parts of the epidermis, such as, for example, the palms of the hands and the soles of the feet.

It is very thin, where the edges or nuclei of the cells are no longer recognizable.

The keratinocytes are diaphanous and are grouped. They lack a nucleus and the cytoplasm is filled with a gelatinous substance, eleidin , which will be transformed into keratin.

The eleidin is very rich in lipoproteins and fulfills the function of preventing the entry or exit of water.

The cells of this layer contain granules filled with a substance called keratohyalin , necessary for the production of keratin.

Distributed between two and four layers, they are cells that have begun to degenerate, so they present in the cytoplasm high concentrations of lysosomal enzymes  and, occasionally, lack of nucleus.

It is in this layer of granular cells that the keratinization process begins .

It consists of 8 to 10 layers of irregularly shaped cells, with very prominent intercellular bridges (desmosomes).

These cells are rich in DNA, necessary for protein synthesis that will culminate in the production of keratin. Langerhans cells

are also found here, which are part of the immune system.

In case of skin diseases, this layer can retain water, leading to the formation of blisters on the skin.

Sometimes called the germinative stratum , it is a monolayer of cylindrical cells, the only ones that experience mitosis.

As new cells form, the former migrate or move to the upper layers of the epidermis, until they break off on the skin surface.

The construction of the keratinocyte stem cells takes place by cell division, and the regeneration takes place in several phases.

The Melanocytes and Merkel cells are embedded in the basal stratum. The former form the pigment responsible for the coloring and tanning of the skin, melanin, and the latter, associated with nerve fibers, transmit part of the touch . 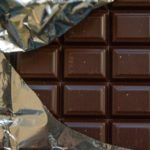 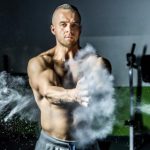