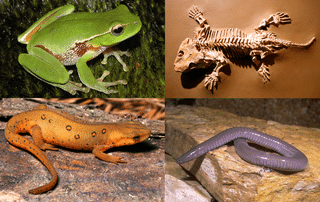 Breathing is performed in different ways in living beings and consists essentially of the exchange of certain gases such as oxygen with light gases as well as the expelling of carbon dioxide , which promotes biological function. Breathing is essential for the metabolism of all biological entities and is necessary for the introduction of oxygen into the system.

The skin breathing or breathing through the skin occurs in animals found in quite humid and even aquatic environments, this despite some count on lungs. In skin respiration, the skin must be constantly moist, just as the skin must be very thin and permeable to gases.

Types of animals that breathe through the skin:

The body of the annelids is formed by rings or segments, and that is why its name is “annelids” which means ring, these animals are the worms that have the mouth on one side and the anus on the other.

They are animals that reproduce by means of eggs.

These animals have no other organ for breathing, and it is through their damp, thin skin that their body absorbs the oxygen necessary to preserve their life.

It is the type of annelids that abound most and are divided into wandering and free-living polychaetes, some that circulate through any being essentially marine and the second that are deepened in the earth or loose gravel but parking in a single place absorbing oxygen from the environment surrounding them.

Earthworms; They feed on the organic waste found in the earth, and make caverns that allow biological activity in the surrounding habitat, as we said, their breathing is carried out by the skin, and they absorb the oxygen that is found around them.

In these are the leeches which feed on the blood of living beings that are around them, are considered external parasites and attack vertebrates.

They suck through their suckers, which are not detected by the victims because of enzymes found in their saliva which inhibit the sensation, suck blood from the victims, doubling their initial size and their reproduction is for each of them because they are hermaphrodites, their breathing is through the skin, and their habitat is in humid places like swamps.

These are animals that live in both water and land, among which are frogs, toads, salamanders and tritons, which live in a dual habitat.

In reality there are few amphibians that can exist in salt water because their skin is very permeable and the toads have a warty skin living in caves in damp and dark places.

They are born in the water, and after some changes they change their life towards the terrestrial world.

His breathing is through the skin, which changes to pulmonary respiration, as his skin is smooth, without hair or scales and moist, which allows him to breathe cutaneously.

Sea urchins are invertebrate animals, and these have as very primitive animals breathing through the skin as happens with the rotifers nematodes and flatworms, which do not have a breathing system taking the oxygen directly from the environment by diffusion.

Examples of animals that breathe with the skin: 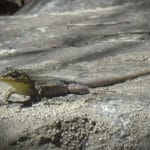