We explain how temperate climate is, what sets it apart from other climates, and what are its main characteristics.

The  temperate climate has temperatures that vary regularly and throughout the year, reaching an average temperature of 10º C when we are rising, while in colder months the average is -3º to 18º C. A very important point is that the existence of this type of climate, determines the presence of 4 clearly defined seasons (summer, autumn, winter and spring).

The temperate climate groups, then, a group of climates that share certain characteristics in a general way, within which it can be said that there are precipitations that oscillate annually between 500 mm and 1000 mm.

Perhaps something quite common within all existing subtypes of temperate climate, is that  summer temperatures are higher than in winter.

Those regions that have temperate climate, are characterized by having 4 well-defined seasons , among which we can say that autumn  begins to witness lower temperatures with the passing of days, being the opposite occurs with spring , because with the Run of the days, temperatures are increasing.

YOU MAY BE INTERESTED IN: Differences between tropical and temperate regions

The climatic conditions of this type are the only ones that present an association between the cold season and the rainy season. While rainfall is almost nil in summer.

Despite the above, it must be emphasized that one of the main characteristics of this subtype is that they have a very low range of thermal amplitude in the year, around 15º C.

It presents between three and five months of dryness during the year.

This subtype of climate is found in the interior of the continents, and in general, towards the north is the temperate cold climate.

This type of climate, whose geographical relationships were explained above, has a very low rainfall index although it has a large thermal amplitude (around 60º C), and very low temperatures during winters.

This fact is due to the fact that the product of the heights, there is a significant decrease in temperature, that is why in the mountains are presented different climatic characteristics to the characteristics of the zonal climate.

In correspondence with its name, the type of oceanic climate, belonging to the temperate climate, is located near the coasts, and is characteristic of areas where medium latitudes exist. The fact of being close to the sea determines that there is very little thermal amplitude, but that there is a great rainfall. 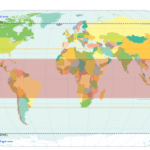 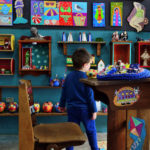