Expressionism was an artistic movement through which the authors expressed emotions and feelings through their works. This expression occurred in an exaggerated way, depraved and subversive, and with pessimism.

Subjects such as loneliness, misery, and madness were often addressed. Check out the main features of expressionism:

1. Use of intense colors

One of the main characteristics of Expressionism is the use of strong and vibrant colors, often unreal, that is, not directly representing reality.

Expressionist works had strong and well-marked features, but there was no linearity in the contours.

The lines had twisted shapes, were somewhat aggressive and did not precisely determine the contour of the shapes.

The lines were thick and angular.

Expressionist art is a dramatic and subjective art, which reflects the perception, emotions and feelings of its author on the subject portrayed.

The above picture, for example, by Van Gogh , reflects the artist’s perception of what he saw through the window of his bedroom when he was hospitalized in the madhouse Saint-Rémy-de-Provence.

Not all components of the work could actually be seen through the window. Some images added by Van Gogh, like the village, were imaginary and subjective, that is, they were related to elements references of the own artist.

Some scholars consider that the villa portrayed on the painting represents the place where Van Gogh passed his childhood.

4. Tragic vision of the human being

The fact that expressionism was a subjective art form allowed the authors of the works to portray their respective visions of life.

This form of expression often addressed more dramatic issues of human feelings, such as fear, loneliness, jealousy, misery, prostitution, and so on.

Situations were sometimes portrayed about life, death, and the spiritual world.

5. Exposure to the pessimistic side of life

One of the main features of Expressionism was the retraction of intense emotions.

There were no major concerns with standards of aesthetic beauty. Often, the works reflected the emotional and mental states of artists who, through their art, expressed a pessimistic approach to the reality they lived.

This pessimism was mainly attributed to the historical moment that humanity was undergoing and which was reflected in a great feeling of anxiety before, during and after the First World War.

6. Deformation of the reality of the world

The reality exposed by Expressionist artists was not governed by an idea of objectivity.

Given that subjectivity is one of the main characteristics of expressionism, the artists of this European vanguard felt free to present reality according to their own perception.

The main purpose of this representation was to prioritize emotions and feelings over an objective description of reality.

The expressionist movement defended individual freedom through irrationalism and subjectivity.

Subjectivity allowed the knowledge of everything that was external to the artist to be given according to his own reference.

Irrationalism, in turn, as the name itself indicates, is opposed to what is rational.

The concept of irrationalism argues that the capacity for learning is superior when a man goes beyond the limits imposed by what is rational.

8. Use of three-dimensionality in works

Expressionist artists used to make use of three-dimensionality in their works.

However, this effect was achieved in an illusory way, that is, there was no real relief in the works. The illusion was intentionally created through traits.

Check out below who were the main Expressionist artists.

Considered one of the forerunners of expressionism, it had as its most emblematic work O Grito .

Munch’s works portrayed quite explicitly the deformed reality, so typical of expressionism.

In the chart below, for example, we can see a face without definite shapes and a sinuous body.

Another feature that is very present in Munch’s expressionist paintings is the expression of fear, pain, and suffering that the beings portrayed reflect.

There are those who attribute the expression of these details to the pained life of the painter who, as a young man, was plagued by the premature death of his mother and sister, and the psychological disturbances he presented in adulthood.

In his art, he portrayed humans and nature, painting what he felt and not necessarily what he saw.

In addition to Starry Night , one of his major works was Wheat Field with Crows .

This work came to be the last painting of Van Gogh. In it it is possible to observe the strong trait of the brush and the subjective representation of the feelings and the perception of reality, both typical of Expressionism.

It is said that the sky with a menacing air, the crows, and the dead-end street reveal the idea of the painter that would already be at the end of life.

Gauguin not only made the traditional use of vivid colors of expressionism, but also used them representatively to express his feelings.

In one of his most famous paintings,  Yellow Christ , the use of colors was intended not as a logical representation but as a symbol of a sense of peace.

The artist’s works were known to represent the difficulties of the Northeastern people and the exploitation of the human being by the elite.

The artist used to paint people with very large feet, exhibiting a deformation of reality, as was characteristic in expressionism.

This exaggerated representation was intended to demonstrate the relationship of the human being’s proximity to the earth.

One of his main works was The coffee farmer .

The works of Anita Malfatti were known for presenting nude portraits, landscapes and scenes from day to day.

One of his main works was The Man of Seven Colors .

The influences of expressionism are evidenced in the artist’s works through the use of strong colors.

In the table below, for example, we can also notice the deformation of reality expressed through a representation of the human being that nothing resembles a real human. 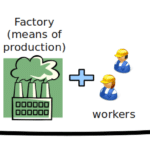 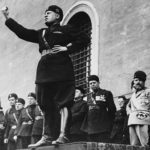