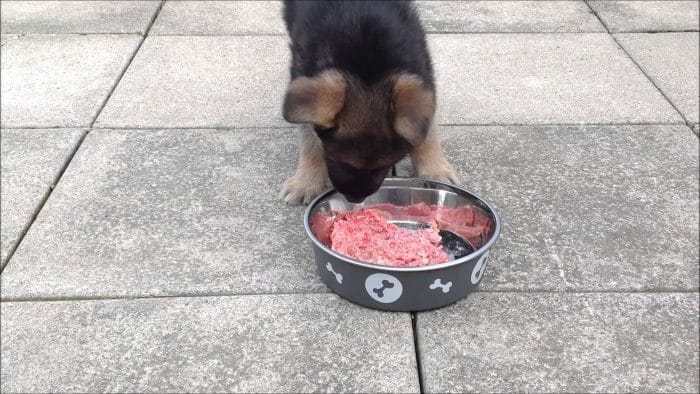 How to know when to wean your German Shepherd puppies

Under normal circumstances, it is best to start with supplementary feeding when the puppies have 2 1/2 to 3 weeks. Let us observe them with great care when they eat to be sure that they receive enough of their mother’s milk to fill their stomachs. If they cling to a nipple, suck enthusiastically and fall asleep, fed up and satisfied, we can be sure that the bitch gives them a maximum level of nutrition. On the other hand, if they move frantically from one nipple to another, sucking and searching, and their stomachs are not filled, this will indicate that the dog does not provide enough milk for their growth and well-being.

Often, when a dog has a small litter of one or two puppies, her milk will begin to disappear much sooner than if she had a large litter to feed. Also, if the mother has been covered too often without enjoying a break, her milk may be lacking earlier than it should. However, even in the case that the mother has enough milk to continue feeding the puppies to an appreciable degree, she will often develop, when the bait has 2 1/2 to 3 weeks, an instinctive and natural attitude of returning the content of their stomach, made up of half-digested food, for your puppies to eat, suggesting, in their own way, that the moment of weaning has arrived. If we have initiated a supplementary feeding regime at the right time, this attitude on the part of the bitch will rarely occur.

To start the weaning process we must use any of the preparations suggested in the previous chapter for orphaned puppies. We pour part of this liquid mixture into a shallow pan after heating it to body temperature and use only enough of the milk mixture to cover the bottom of the pan. We must then maintain this, with one hand, just below the puppy’s chin and, with the other hand, gently hold it by the head just behind the ears and, without exerting force, submerge its muzzle and lips in the saucepan. Release the GSD head immediately,let him lick with his lips and he will like the taste of the liquid in them.

Speak gently and in a tone of encouragement each time we repeat the process. Sometimes, there will be a puppy that will start to lick the milk from the pan after the first contact, other times it will be necessary to repeat the operation until the desired result is achieved. It may be necessary, in certain cases, to keep the German Shepherd puppy’s chin in the pot until it begins to lick.

Let us be careful not to pour too much of the milk mixture into the saucepan or not to push the puppy’s head into the liquid, as it is imperative that their nose be kept free of the new food so that it does not breathe the liquid or block its holes nasal with milk If this happens the puppy becomes scared, look at the pan with distrust and the process of weaning is slower and exasperating.

Repeat the process with each puppy until all have begun to lick on their own initiative, should emphasize that although it will be necessary to keep the pan at the level of the chin during the first times that they are given food in this way, the pan can be deposited on the floor as soon as they acquire practice in eating, or licking, inside it.

Of course they will pile up and go inside the pot, staining and staining their littermates with their contents, but they will also become more expert in the process of eating in a container, which, after all, is the ultimate goal pursued. We will administer the mixture twice a day during the first two and, at the end of this period, we will have that the act of eating in a saucepan will have become a conditioned routine .

Adding soild to your puppies diet

Now is the time to add some fat and solid matter to your diet but, considering that they still cannot chew, any matter of this type that is added should be shredded into very small pieces to form a mixture of creamy consistency when administer with food.

Puppies grow better when they follow diets composed of milk, meat, fat and cereals. Growth is achieved mainly through proteins, but these differ, which is why puppies fed diets based on plant proteins do not grow or develop as well as those that receive animal proteins.

Vitamins E and K are essential for the welfare of the puppy and must be present in adequate amounts in the diet. Remember also that 70 percent of the energy of the puppies comes from the ingestion of fats, so this food element must be added generously to the ration. In experiments carried out, puppies given diets lacking fat have developed symptoms of deficiency characterized by anemia, weight loss, dull hair, reduced vitality and, finally, death. Fat, however, can not by itself cure the advanced manifestation of this condition,

Fat also acts as a vehicle for vitamins A, D, K and E and, in addition, not only slows down the digestion and makes the animal get as much nutrition as possible from its food but helps in many other ways to maintain the puppy, or the dog fully developed, healthy and vigorous. For our puppy to enjoy all the virtues present in fat, it is necessary to incorporate it in 20 or 30 percent to your diet.

Practically every breeder with which we stumble has its own diet for weaning and the subsequent phase, but the basic element necessary in any of them is the balance, and a properly balanced food must be that which results in growth, health and vitality . Puppies exist in the market, excellent commercial foods in the form of grain, to which it is only necessary to add milk and fat. Or you can also purchase, for this purpose, baby foods with grain, such as Pablum, Ceravin or those advertised with the mention “high protein level” and “reinforced”. These, however, must also be modified to fit the needs imposed by the puppies’ diet.

The author uses a mixture of ground oats and wheat as a staple cereal. To this, while it is cooked, add a cup of corn flour reinforced with vitamins, dried and powdered eggs, melted fat (beef, pork, butter, chicken, Crisco, etc.), minced beef, a little salt and milk powder. After this mixture has been cooked and cooled, a small amount of flour with vitamins and minerals is added to it, thoroughly stirred and the resulting dough is distributed in cans of appropriate size and stored in the refrigerator.

To have it ready for immediate use, place the necessary amount in the saucepan of the food, add raw meat and properly chopped fat (heart, tongue, intestine and a small amount of ox liver) to increase the volume administered. in about 25 percent, finally adding evaporated milk dissolved in water.

This mixture of milk and water is preheated and, when added to the solids, all this reaches the appropriate temperature. After proceeding to the mixture, the food has the consistency of a very thick cream, which must be gradually converted into something more dense and viscous, similar to a stew, until the puppies arrive at 4 weeks.

When the bait is 5 weeks old, a food for puppies based on finely ground grain is progressively introduced into the basic diet. And when the puppies reach between 6 1/2 and 8 weeks, the original formula has been eliminated and the grain food is administered with fat and raw meat, with milk and animal broth to lend it the right consistency. A valuable addition to the puppy’s diet is a good edible oil (such as Dietol) or a concentrated fish liver. For this purpose, a drop is placed at the corner of the puppy’s lips one day after birth and all the following days for a week, then 2 drops, and then 4 drops until weaning, when the oil can be added to the animals. foods. We must be very careful, however, not to exaggerate the administration of any supplementary dietary oil because we can provoke exactly the kind (in appearance) of bone problem (rickets) that we try to avoid with its use.

During all the time that we are busy with weaning and feeding the puppies we must not forget that there are other tasks that also need to be carried out. Your nails should be kept short, using manicure scissors so that they do not scratch the eyes of your littermates during their games . Their eyes will open when they have a week to 12 days (according to the ovulation period of the dog) and will be blue until they later change to their true chestnut color.

When the puppies have about 3 1/2 weeks, a fecal analysis must be done by your veterinarian to determine if they have worms (and, in fact, most have them) and what kind they are. If they are infested with worms, we will have to fight them immediately, and if as a consequence they have become puny, we should not try to grow them without first releasing them from the parasites. After the worms have been eliminated, the pups will quickly recover a normal level of health and growth.

Also, before the puppies are fully weaned, and preferably while still feeding on the mother’s udders, it is advisable to consult with our veterinarian about a scheduled series of inoculations and preventive vaccines. Currently there is a new serum against distemper (serum against human smallpox) that can be given to puppies at a very young age, even when they are still being breastfed. This serum, administered by intramuscular inoculation, is not affected by the natural immunity enjoyed by puppies when they drink their mother’s milk, an immunity that on many occasions makes the normal immunization vaccines negative.

This new vaccine is effective until the puppy has passed all the important phases of its early growth and, when it is approximately six months old, the normal immunization vaccine against distemper can be administered. Incidentally we have that the worms that most puppies suffer from are round type currents. To combat them we have Piperazine, which is less toxic than most earthworm medicines and offers the advantage that the puppy can be fed normally, so it can be recommended for roundworms, whose larvae in the bloodstream of The mother often crosses the placenta to infect the puppy before birth.

Most people worry about whether their puppy gains enough weight. One way to determine it is by observing its general state, its complexion and its vitality. Another way is by weighing them and keeping notes of the various increases. From six months of age until full development, an average and satisfactory weight gain per week, for a healthy and fast-growing puppy of German shepherd dog, is about 1,350 to 1,800 kilos.

Remember, also, to make known to our puppy, at an early age, water as a drink. At first they do not seem to see it or know what it is, but they soon they learn to lick it, just as they do with milk and other foods mixed with it, and in this regard it is worth bearing in mind that it is a valuable and mineral-rich complement to your diet 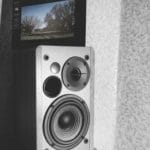 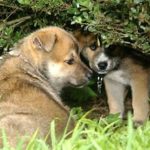