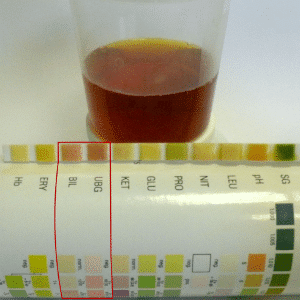 It is called coluria because of the presence of bilirubin in the urine , which gives it a typical amber or dark brown color commonly called coca cola urine . The coluria is an important sign of bilirubin increase that sometimes is the first symptom of a hepatitis or some problem of the biliary tract.

The coluria is revealed when the serum bilirubin is greater than 1.6mg / dl. The presence of coluria is a useful clinical sign to distinguish the cause of jaundice from a person, since only the direct or conjugated bilirubin found in the blood is eliminated by the kidney (water-soluble), instead the indirector unconjugated bilirubin it is bound to albumin and there is no renal elimination (liposoluble).

Bilirubin is a yellow pigment of bile origin caused by the degradation of hemoglobin . Red blood cells or red cells contain hemoglobin and have an average life of 120 days, which is why they are in constant production and degradation. Because bilirubin is not soluble, it must bind to another element to be transported. In this sense there are two types of bilirubin, the indirect or unconjugated and the direct or conjugated which is the soluble able to be filtered by the kidney.

The colored urine coke usually also has foam yellowish tint that stains the collector and may be the first sign that something is wrong.

The coluria must be confirmed by biochemical methods, identifying bilirubin in the urine, since it can also be colored dark by other substances such as hemoglobin , myoglobinand other compounds. 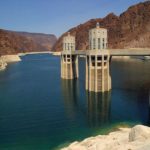 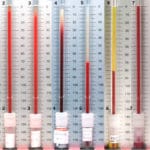