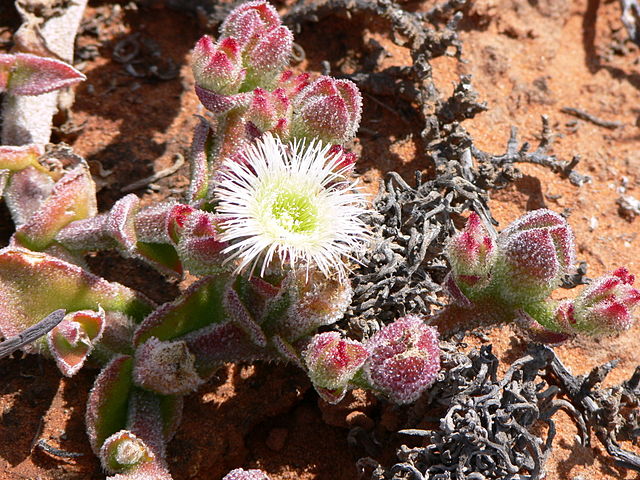 The family is concentrated in southern Africa, but a few pantropical species extend to the West Indies, southwestern parts of North America, Florida, South America and Australia. Some genera, belonging mainly to the subfamily Molluginaceae are more cosmopolitan ( Sesuvium, Tetragonia, Mollugo ).

Its members form an immense group of which certain halophiles ( Mesembryanthemum crystallinum, M. nodiflorum ) abound on the coasts; but most are confined to the dry areas of South Africa, the Karoos or the semi-desert regions of Kalahari, where they form with Acacia horrida almost all the vegetation. In Cape Province (Doring Basin), they constitute a succulent steppe, in association with other fleshy plants: Crassulaceae , Liliaceae , Euphorbiaceae .

Aizoaceae are herbaceous plants and small annual or perennial shrubs, more or less succulent. Very exceptionally, one species, Stoeberia arborescens , is shrubby, up to 3.5 m tall. The roots are fibrous, more rarely tuberous. The stem can be underground; it is often erect or prostrate and lurking.

The leaves are alternate or opposite, sometimes whorled, basal or cauline. They are simple, very rarely pinnate, whole and generally without stipules. With their very fleshy leaves, they are particularly well adapted to drought. Heterophylla is common in Mitrophyllum and Monilaria: the pair of leaves formed at the beginning of the resting period is more compact than the one formed in full growth, and acts as protective sheath of the apex. Other genera are partially buried, leaving only the ends of the leaves to emerge from the soil: an apical tissue layer, rich in calcium oxalate, filters the very strong sunlight before it reaches the thin chlorophyll layer located below ( Fenestraria, Frithia, Ophthalmophyllum ).

Aizoaceae therefore group two types of plants quite dissimilar by their port and their flowers. Some, minority ( Mollugo ), have herbaceous, slender stems. On the contrary, the others are succulent, fleshy, often welded, flattened (Tetragonia, Apatesia, Schizophyllum ) or, on the contrary, narrow, conical, cylindrical or ovoid (Lithops), covered with a vesicular epidermis ( Mesembryanthemum crystallinum ) or waxy ( Pleiospilos ). They are sometimes bushy forms ( Lampranthus, Drosanthemum ) in rosettes ( Faucaria ) or reduced to two large opposite leaves ( Pleiospilos ). The Lithops , even more contracted, have the appearance and the color of the stones where they live. The Titanopsis have white scales on the leaves, imitating limestone outcrops. it is one of the rare cases of vegetal mimicry.

In these plants very adapted to the xerophytic life (succulence of the leaves, mucilaginous sap, deep roots, tuberous in Delosperma , or paradoxically small, ephemeral, drying with the soil in the Lithops ), the active life is closely linked to the rains (flowering , opening of capsules, dispersal and germination of seeds). Moreover, we must not forget that the Aizoaceae are, with the Cactaceae and Crassulaceae , the most numerous representatives of the C4 type of photosynthetic metabolism.

The internal tissues contain large, pentosane-rich aqueous cells that characterize succulents. At Muiria these cells can reach the millimeter, and withstand desiccation for several weeks in a very dry environment.

The flowers are either grouped in terminal or axillary cymes, or they are solitary. They are usually axillated by a bract, but bracteoles are absent except in Trianthema or Cypselea . As for the vegetative system, there are two main types of flowers : the first, a minority ( Mollugo And affine genera), has small, corolla-free flowers, built on type 5, but often reduced (only 3 stamens and 3 carpels). at Mollugo verticillata ). The second has flowers with many stamens ( Tetragonia, Aizoon ) whose outermost, sterile, and petaliform form a pseudo-corolla that makes them look at first sight to the flower heads.Asteraceae .

In these two groups, we find the flowers of type 5 or 4. They are diurnal, perigynous, epigynous or hypogynous (Molluginaceae), actinomorphic, and hermaphrodites, although some species of the genus Tetragonia have unisexual flowers and there is dioecy.

With tubular or campanulate hypanthium, the flowers consist of sepals of 4 or 5, more rarely 3 or 8, sometimes petaloid or with appendages, equal or unequal, and slightly fused at the base. The petals, including the petaloid staminodes, are 3 to 250 or 300, but may also be missing. They are free or knowledgeable at the base, are often bi-tetraseried and have a generally linear limb. The stamens, between 1 and 500, are free or in bundles, and have bilocular anthers with longitudinal dehiscence. As already mentioned, the most external can be transformed into stamina petaloïdes brightly colored. Around the ovary, there are nectariferous glands arranged in a ring or groups separated from each other. The Mollugo, Sesuvium, Aizoon ), semi-inferior ( Tetragonia ), or inferior and syncarpellar ( Mesembryanthemum ). Carpels, 2 to 25 (maximum 5 in Molluginaceae), with axillary or parietal placentation, contain numerous anatrophic or more frequently campylotropis eggs (only one in Tetragonia ). There are as many styles, free or partially welded together, as there are carpellar boxes, although these may be absent.

The flowers are pollinated by insects and require full sun to blossom. Many of them close and open at specific times.

The fruits are capsules surrounded by the persistent perianth. They open with lids (pyxides Sesuvium ) or by slits. These separate highly ornamented lobes that bloom horizontally, simulating a flower ( Mesembryanthemum ). The achenes, berries and nutlets are exceptional. The seed, sometimes stalked or strophiolate, has a large curved embryo surrounding a floury albumen.

The dehiscence of dry fruits depends on the degree of humidity of the ambient air, thus ensuring germination during brief periods of rain. conicosia and some similar genera have 3 different methods of seed dispersal. First, the capsule opens under the action of water and some seeds are driven by raindrops. Then, when it is dry, the capsule remains open and the seeds that are inside are ejected on the outside. Finally, the whole fruit breaks into segments dispersed by the wind, each blade resembling a wing containing a maximum of 2 seeds blocked in 2 folds in the shape of a pocket. This fruit structure is among the most specialized in Angiosperms .

The Aizoaceae are divided into five subfamilies: Sequoioideae , Tetragonioides , Molluginaceae , Mesembryanthemaceae , Rosoideae . Of these, Tetragonioides (Tetragoniaceae, JK Small, 1933), Sequoioideae (Sesuviaceae), and Molluginaceae (Molluginaceae) are sometimes treated as independent families, especially for the latter. It was FA Pax and K. Hoffmann who, in 1960, merged the two families, but today this conclusion is invalidated by phylogenetic studies based on rbcL gene sequence analysis (Chase et al., 1993) which, on the contrary, separates Molluginaceae from Aizoaceae but brings them closer to Nyctaginaceae and Phytolaccaceae .

What Linné grouped under the genus Mesembryanthemum is nowadays commonly separated, on the basis of the structure of the fruit, into 125 genera and about 2000 species. Some authors isolated this group as Mesembryanthemaceae (H. Herre 1971, H. Herre and OH Volk 1948).

The structure of the seed, the abnormal anatomy of the stems, the staminal origin of the petals, the tendency to succulence are the characters that allow many authors (Engler in 1912, Wettstein in 1935, Emberger in 1960), include Aizoaceae in the order of Centrospermales, then in that of Caryophyllales by other more modern authors (Cronquist, Dahlgren). Hutchinson (1959) ranks them in the herbaceous series, with Caryophyllales ( Mollugo) , very similar to Caryophyllaceae). For all these authors, they are similar to Portulacaceae. The parietal placentation, found in some, does not differ fundamentally from the central placentation, characteristic of the order, as Payer, Eichler (1875) and then Hagerup (1936) demonstrated. Indeed, the floral axis, carrying the placentas, first centrally, is secondarily crushed by the growth of carpels; it is invaginated, causing the placentas to migrate on the walls. Finally, there are also betalains in this family. These interpretations return to reinforce the homogeneity of the Caryophyllales order.

Aizoaceae, their numbers are only of ornamental interest ( Lithops, Conophytum, Pleiospilos , many Mesembryanthemum ). However, the fruit of some, including Carpobrotus edulis , spread on the coasts of Western Europe, are edible. Also the tetragonal Tetragonia whose leaves are eaten as an spinach . 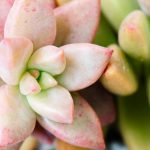