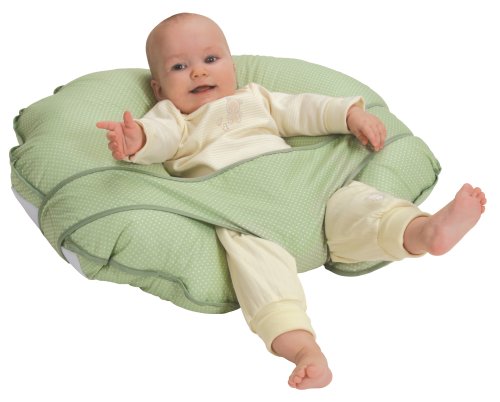 We present a unique cactus and very colorful,

The genus Echinopsis comprises over 50 native species of South America.

This cactus is a variety of the San Pedro Cactus, which we present here in your favorite blog.

He is a member of the Cactaceae family. It is native to the mountainous areas of southern Ecuador, northern Peru, Bolivia and northern Argentina.

What is the Brain Cactus?

Cactus San Pedro Cristata, are fast growing plants very rare and special appearance. Its similarity to the shape of the human brain, gives it that popular name.

The growth is generally like a ridge, instead of circular. This unique variation of the San Pedro cactus grows in several directions.

Each zone of growth develops at its own pace, forming the characteristic ridge, which makes the San Pedro Cristata adopt very different forms.

It forms as a small tree up to 3 to 6 meters high by 1.8 m extended, with several branches, usually extending from the base.

The rare crest shape can also be very large, which makes it a spectacular specimen.

It is very curious growth, in the form of a ridge formed by numerous stems, light green. Its flowers are about 20 cm, they are nocturnal and white with black hair.

Description of the  San Pedro Cristata.

The characteristic crested shape can also be very large, which makes it a spectacular specimen.

The stems, in the form of a fan, bluish green or pale green to dark, forming over time imposing mounds similar to brains up to one meter in diameter and height.

The ribs, broad at the base, obtuse, rounded, with a deep horizontal depression on the areola.

Thorns are often missing, when they are present, they are about 3 to 7, uneven, only a few millimeters long, from dark yellow to light brown. 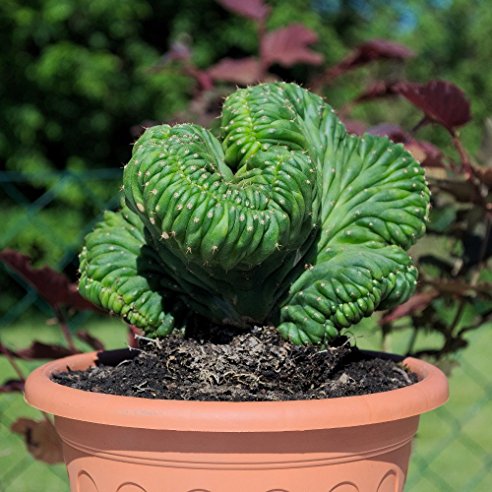 The spines are found in the nodules and are evenly spaced (1 to 2 cm apart) along the ribs.

Flowers: very large, white, at night and open for the next day, fragrant, up to 22 cm in diameter. They bloom in July.

The fruits are oblong, dark green, about 5-6 cm long, and about 3 cm in diameter.

How to grow the Cactus San Pedro Cristata

The plant, Cactus Cerebro-Cactus San Pedro Cristata, is very easy to grow, even in a pot and is quite resistant to cold temperatures as low as -12 ° C, for its Andean origin.

It needs a mixture of fertile and well-drained soil. Water the plants well and allow them to dry before re-watering.

This species seems to enjoy more than water irrigation, that most of the cactus.

In fact, their growing requirements are more like “normal” plants, than like most cacti. During the growing season it must be fertilized monthly.

The Cactus Cerebro, likes to receive the sun all year round. The minimum temperature at which we can have it, is about 10 ° C.

For that minimum temperature, the plant can hibernate on a terrace outside.

The plant can tolerate temperatures close to 0 ºC, but it is recommended to keep it above 5 ºC.

In the sun exposure of our Cactus Cerebro, it must be in full sun.

During hot summers, cacti are subject to possible sunburn, so you have to control their exposure to the sun.

Inside they need bright light and some direct sunlight.

During the winter months, place them in a cool and bright place and encourage them to enter the winter dormancy, retaining water and fertilizers during the winter, as they will settle or lose weight due to the lower levels of light.

They are susceptible to diseases caused by fungi if they receive too much water, although they are not as sensitive as other cacti, especially in hot climates.

They have black spots at beginning of rot, less than moderate irrigation and only in hot climates.

If they stay wet during cold periods, they will surely suffer.

The San Pedro Cristata, grows quite annually, if it is well fertilized and watered during the warmer months, especially if it has acclimated to the full sun.

How to water and fertilize the Echinopsis Pachanoi Cristata.

Like any cactus, the Trichocereus pachanoi cristata requires a fertile and well-drained substrate .

For a correct irrigation, water once weekly during the warm seasons.

The rest of the year, water once a month or suspend in irrigation in case the ambient temperature is very cold. 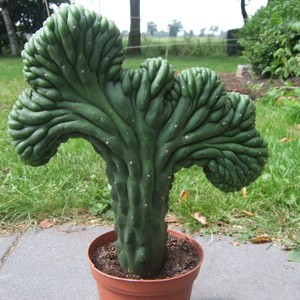 It is like all cacti, does not tolerate water puddles . We will avoid possible rotting of the roots.

In spring and summer, it is advisable to fertilize the substrate of the Cactus Cerebro-Cactus San Pedro Cristata, especially if it is in a pot.

Incorporate a commercial liquid fertilizer for cactus, diluted in irrigation water every 30 days.

During the winter the fertilizer must be suspended.

The cultivation and propagation or multiplication of Echinopsis / Trichocereus Pachanoi Cristata is very easy.

It is propagated by cuttings, obtained by dividing any part of the ridge.

Let the cut heal for at least 2 days in a cool, lighted place, but protected from the sun and then sow it.

It is also possible to graft it. 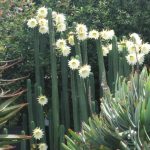 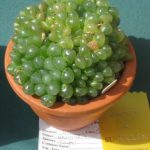