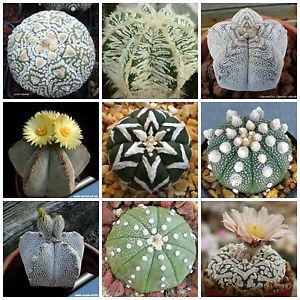 The Astrophytum are very easy to grow cactus, provided you follow certain rules to avoid big mistakes. The species grows naturally on alluvial and bushy terrain in eastern Mexico and occurs more occasionally in southern Texas.

Plant with very slow growth, spherical, star-shaped or divergent, the e star-shaped cactus becomes columnar with age (except the species Astrophytum Asterias which does not exceed 8 cm high). It can have from 3 to 8 ribs which, with the time, can even go up to 10.

The star cactus accepts full sun and can withstand slightly negative temperatures of very short duration. It does not bloom until the age of 6 years. It has scales and white spots more or less numerous. Thorns may be present or absent depending on the species. The flowers emerge at the end, solitary or in a group

The name of Astrophytum comes from the Greek and means, star form.

It was from the Astrophytum myriostigma, which gave its name to the genus, discovered by Charles Lemarie, a French botanist.

Its origin is Mexico and specifically, the states of San Luis Potosi, Nuevo Leon, Tamaulipas, and Coahuila.

There are 6 species of this cactus, all listed in this table, but also hundreds of hybrids. You will not miss a choice when you buy!

Good to know: the group Astrophytum asterias , capricorn and coahuilense, and their cultivars are a little more delicate than the Astrophytum ornatumand myriostigma . These last two are almost indestructible, it is for this reason that they are also frequently sold in garden centers.

The choice of pots depends on the goals you set for yourself. It is good to know that the Astrophytum have no particular preference as long as they have enough room to spread their roots. It is not necessary to choose too large containers. On the other hand, they must be very draining.

Many cactus lovers have a preference for rigid plastic square pots to align their valuable boarders. For large-sized species such as Astrophytum caput-medusae, use terracotta pots, which enhances them. However, the ideal remains a small, shallow cup.

Another alternative, quite used and interesting, is the culture in an old ball aquarium. This allows to mix several varieties between them, different heights and sizes, and to give the whole a beautiful desert aspect by finishing the plantation with a fine sand colored or not, as well as some stones like quartz or simply pebbles. This mode of culture in addition to its originality allows maintaining a constant microclimate.

When to plant the Astrophytum?

Repotting can be done at any time of the year, but to avoid the risk of rot, it is better to wait until the substrate is dry.

For the same reason, it is safer to wait 4 to 5 days before the first watering, because the roots are often injured at the time of handling.

The substrate is also a very important element in Astrophytum culture. It must be rather mineral and well-draining for fast drying.

The Astrophytum are not demanding cactus. To constitute a good soil, several mixtures are possible as long as there are few organic elements and that the water flows quickly  :

Re potting every 2 years is enough.

Good to know: the peat mixture in which gardening cacti are grown is not suitable, it is imperative to quickly change it to a real cacti soil.

Culture and maintenance of Astrophytum

Water regularly from March to October. Then gradually decrease the contributions in the fall to stop in winter.

Winter at the first cold: bring your plant under cover if it has remained outside, then choose a lighted room. If the room is not heated, do not water during the winter. The wintering must take place at a temperature between 5 and 15 ° C.

In an apartment, water once a month in winter or every three weeks if the temperature is above 23 ° C. Get out of the plant in good weather, but you can also leave it all year indoors if it is very bright.

In their natural environment, Astrophytum grows in nutrient-poor soils. In cultivation, our dear cactus are also in poor substrates. To accelerate their growth, it is then recommended to bring some fertilizer. Make this intake only during the growing season once a month with liquid fertilizer mixed with water.

Cactus fertilizer is available commercially, but its price remains high. You can instead use a geranium-type fertilizer whose NPK (nitrogen-phosphorus-potassium) ratio is little concentrated in N, for example, 5-10-15. The use of granular fertilizer delay in the potting mix is ??to be moderated.

During the growing season, star cactus’s tolerate our maximum European temperatures without any problem. Exposed in full sun at a temperature of 40 ° C, or even a little more has no detrimental effect on them. It is important that these plants have great heat in the summer with a very strong light to promote their flowering. However, beware of Astrophytum cultivated in a poorly ventilated greenhouse where the temperature can reach and even exceed 60 ° C in the warmest of summer!

Caution: Beware of excessive fertilizer, cactus are greedy and can not control themselves. They tend to swell too much and take on the appearance of a vegetable ready to burst. The plant loses in aesthetics and cracks can appear.

There are two main types of propagation: seed sowing and cuttings.

Sowing succulents are easy to do. Buy the seeds commercially or harvest the seeds on your own plants if they are old enough to produce (average 6 years). Let them dry well and keep them in a protected and dry place. The ideal period of sowing is in spring.

Sow in a box or in a heated mini-greenhouse, the soil temperature must be constantly higher than 21 ° C. Seeding is best done in shallow terrines.

Place on half the height of the gravel for drainage, then add well-ripened cacti (or the proposed planting mixture above).

Moisten the substrate and tamp lightly by hand. Place the seeds one by one and cover them with a thin layer of coarse sand.

Cuttings are the easiest technique to achieve and succeed. Its great advantage is to keep all the characteristics of the initial species.

This mode of multiplication is practiced from a new outgrowth or stem (for Astrophytum caput-medusae ):

Good to know: these slow-growing plants produce suckers at the base which must not be separated from the mother plant. Lateral discharges hardly emit roots, so any attempt to multiply by a division of these rejections is doomed to failure.

The Astrophytum can live long but they must be protected against attacks by scale insects roots and excess moisture that cause rot, especially on young plants.

Against root scale, water your cactus with warm water mixed with cooking oil which, by settling on the shell of insects, asphyxia (1 tablespoon of oil to 1 l of warm water).

Be sure to use all organic fertilizers such as manure, nettle manure or others. No compost either during re potting, it is a material too rich for cacti.

The fifth member of this group of six ( Astrophytum caput-medusae ) was recently discovered in 2001. It is quite distinct from other members of the genus and very distinct from all other cactus genera as well. Therefore, many hobbyists believe that it should be part of its own genus and consider it the only species of the genus Digitostigma (the name Digitostigma describes long tubers that grow like octopus tentacles). 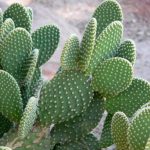