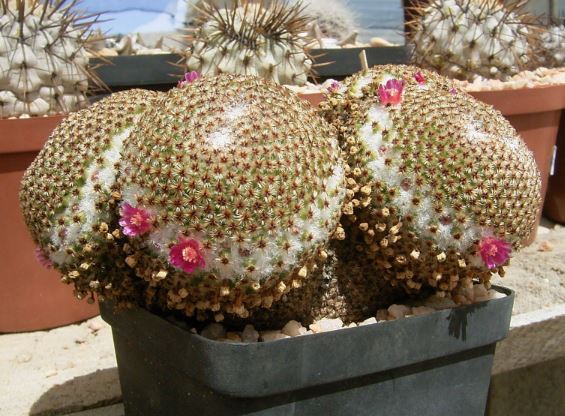 We are with a species of the family of the cacti, of the Mammillarias, the Mammillaria crucigera also known as  Owl Eye Cactus, which is a very beautiful cactus.

Originally from the Mexican states of Oaxaca and Puebla and thrive at an altitude of between 800 and 1,100 meters, approx. It is popularly called as, Biznaga with cross thorns.

The habitats of the Mammillaria crucigera are edges of vertical cliffs and crevices in rocks, which are generally formed of pure plaster.

They are areas of great erosion, which leads to the destruction of their natural habitat and causes their premature disappearance. They are covered areas by tropical forests, quite dry and abundant vegetation.

They are usually eaten by goats, which roam the rocky cliff areas.

Similarly, in its environment, it is affected by the attack of a beetle that eats the cactus, from the inside, killing the plant.

It is, then, a species threatened by the loss of its habitat.

Description of the Mammillaria crucigera or  Owl Eye Cactus?

It is dark green or olive green and can strike light brown or even purple tones. They can reach 10 cm in height and 4 to 6 cm in diameter.

It has the head or upper part of the cactus, flattened, cylindrical short and curved. The stems can be several united, presenting themselves as a group, with several heads that come from the division.

During the growing season, it usually generates some latex and the tubers, is stretched,  and with the armpits full of white wool.

The areolas are reddish brown with radial spines, about 20 to 30, whitish and up to 2 mm in length.

The central spines are usually 4 or 5 yellowish or brown and also about 2 mm long.

It presents small flowers, with a shape of Embudo, of about 1 to 2 cm, of dark pink or purple color and that does not usually excel on the thorns.

The fruits are dark pink to red, as a group of small brown seeds.

This means that it is bifurcated, opened or divided, in two parts. Bone creates more than one head since they are bifurcating progressively.

How to grow the Mammillaria crucigera.

It is a kind of very slow growth. It should be planned in a pot with good drainage and a substrate with a good base of minerals and porous, with part of coarse sand.

Water moderately in the growing season and dry or almost in winter.

If anything, feed with a rich potassium fertilizer and in the summer.

This cactus appreciates that the temperatures do not fall below 8º C, in warm and well-lit environments. Even so, it is resistant to frost, but better to avoid temperatures below 5 ºC.

Hold up the direct sun or full sun and the semi-shade.

For its multiplication, the best thing is to make cuttings or grafts and by direct sowing, at the end of winter. 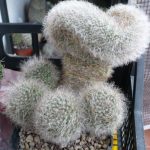 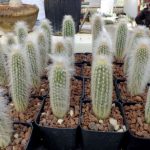