Between four and fifteen days after planting, the cactus begins to germinate, and we ask ourselves: What kind of care do you need? In this post we will review some general care, however some species may have special needs and may take longer than 15 days to germinate .
When the first seedlings appear, they have the appearance of tiny green balls or elongated sticks, according to the shape of the cactus sown. They may have yellowish and / or reddish tones without that being a problem.

At the beginning there are no signs of thorns or areolas, you can barely notice the two cotyledons (first leaves that emerge when germinating and then they are lost).

While the seedling is in this phase, it is advisable to keep the seedbed covered to conserve moisture, and if necessary to support it in a tray with water so that it is wetted by capillarity careful not to exceed the amount of water so that it does not exceed the level of the substrate and end up floating the seedlings.The water can be added a preventive fungicide type Captan, but if the first irrigation was done with fungicide is not necessary.It

is important to remember that the seedbeds should NEVER be in direct sunlight, but in a very bright place

It is very common to see the roots emerge, with their tiny absorbent hairs that look like cotton fibers. Many people confuse it with the hyphae of a fungus and water it with fungicide or even begin to remove it by hand, destroying the seedlings. You have to be very careful not to get confused, it is better to let a few days pass and see how it evolves.

When the seedlings grow “legs up” with the roots out of the substrate or lying down, it is convenient to arrange them with a well sterilized clamp with alcohol and a lot of softness, reach with supporting them in some hole of the substrate in the correct way and the roots will find their way .

The first weeks, it is convenient to look at the nurseries daily to detect these problems.

Another disadvantage that can occur is to find the seedlings as water bags that melt when touched, in that case partially open the seedbeds and stop with the irrigation by immersion until the substrate dries a little.

Sometimes tiny mosquitoes appear in the seedbeds, it is called the sciarid fly and what it does is put eggs in the ground, then larvae are formed, and these feed on the roots of the seedlings, killing them from below. They are very difficult to fight, therefore it is best to prevent them. One way is to plant early (late winter / early spring) because high temperatures favor reproduction, although they can reproduce all year round.

Another factor that favors the appearance of sciarid fly is humidity. Therefore, while the seedlings have no visible spines or areoles, it is better to have the seedlings covered. When the seedbeds are uncovered, be careful not to wet the substrate too much, let it dry slightly between irrigation and watering, and thus cut the life cycle of the fly.

If they are already installed, they can be treated with an insecticide based on Cypermethrin, or by transplanting the seedlings to a new clean substrate.

As I explained before, when the first spines or areolas appear, the seedbeds can be uncovered, and I would say that they MUST be uncovered, so that the excess moisture does not kill them. The cactus need good humidity to germinate and develop the first days, but they are still cactus and soon they will have the necessary tools to withstand the droughts. There are those who keep the seedlings covered up to six months with good results, in my case I prefer to expose the seedlings so that they are adapted to lower environmental humidity conditions and prevent the appearance of fungi.

So that the seedlings get accustomed little by little to the new atmosphere without so much humidity, at first the lid can be punctured or half opened, allowing the exchange of gases and the exit of the humidity gradually.

After one or two weeks the seedlings can be completely uncovered and start sprinkling (with a sprinkler) very gently and from far away so as not to fly the seedlings of the substrate, letting it dry slightly between irrigation and watering. As they grow larger and with more thorns, the risks can be more widely spaced. It is impossible to determine an exact time between irrigation and irrigation (such as saying “water every two days”) because it will depend on the humidity of the environment and the type of substrate, among other things. You have to sharpen your eyesight and see that they “ask” for the seedlings. When they are thirsty they tend to get dark and cease growth, apart from that the earth it looks dry.

You can also continue watering by immersion .

When the seedlings have several areolas with spines and they are resistant to the lack of water, they can be “pealed”, that is, transplanted to containers with a lower density of cactus, or individual pots. It is necessary to ring when a seedbed is crowded and tight, like the one above .

When it is transplanting, one must be very careful when untangling the roots, trying to cause as little damage as possible to the seedlings.

Once they are replicated, the cactus can begin to be treated as an adult cactus in terms of irrigation, but always avoiding direct sun. It is important anyway that they have good light, so that the plants do not become stolen (growth deformed and elongated due to the lack of light).

Another option for the nursery cactus is to graft them, this is usually done with special cacti, slow-growing or difficult to grow.

More From: Cactus and succulent care 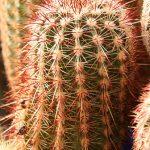