Weak acids do not separate completely in their ions in water. For example, HF separates into the H + and F ions – in water, but a part of the HF remains in the solution, so it is not a strong acid. There are many more weak acids than strong acids. Most organic acids are weak acids. Then leave the list with all weak acids:

Weak acids ionize incompletely. A clear example of reaction is the separation of ethanoic acid in water to produce hydroxonium cations and ethanoate anions:

Keep in mind that in this chemical equation the reaction arrow points in both directions. Only 1% percent of ethanoic acid is converted into ions, while the rest is ethanoic acid. The return reaction is much more favorable than the forward reaction, therefore the ions easily change to weak acid and water. 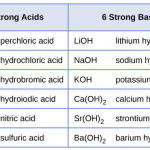 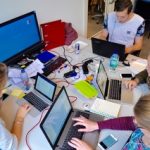