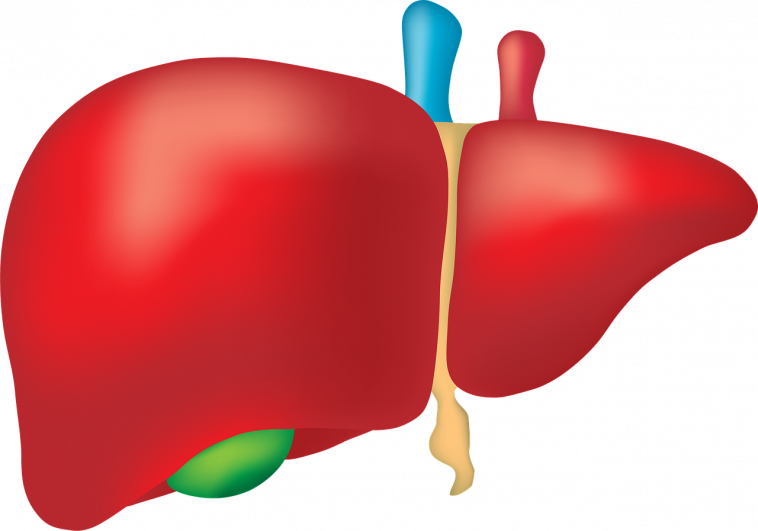 The liver is the largest organ in the body and is made up of different structures that allow it to help with digestion, the storage of substances, and the elimination of toxins from the blood.

Although it does not have as much prominence as the brain , heart or lungs , the liver is one of the vital organs of our body . And, in fact, with its 1.5 kilos and 26 centimeters wide, it is the largest organ in the body.

The liver is vital to maintain a correct state of general health since, being part of the digestive system but having implications in many processes of our physiology, it helps the digestion of food, stores substances and eliminates toxins.

Taking care of the liver, especially avoiding abuse with alcohol and other substances is essential, since the structures and cells that make it up are very sensitive and if they lose their functionality, the health of the entire organism is in danger.

And it is that when the liver structures fail, it may be necessary to resort to a liver transplant, which, with a price of between 110,000 and 130,000 euros and its more than 12 hours of intervention, is one of the most expensive surgical procedures from the world of medicine.

What are the functions of the liver ?

The liver is, as we have said, the largest internal organ in the body. It is located in the upper right part of the abdominal cavity, above the stomach and kidney of that hemisphere of the body and just below the diaphragm, the muscle that is under the lungs.

And that it is the largest organ in the body is no coincidence. It occupies so much space since many physiological reactions take place inside it that regulate all kinds of bodily processes, from a level of digesting food to purifying the blood of drugs.

For this reason, the liver constantly receives blood supply to carry out its functions, which are very varied: production of bile (a substance that helps digestion to take place correctly), clearance of drugs, alcohol and other harmful substances from the blood, storage of glucose for release or retention (depending on blood levels), conversion of harmful ammonia to urea (essential for the kidneys to generate urine), iron storage, regulation of blood clotting factors, production of immune factors to effectively fight infections, production of cholesterol and specialized proteins in the transport of fats, etc.

As we can see, the liver fulfills innumerable functions in the body . And this is possible thanks to the coordinated action of many different structures, which will be analyzed individually below.

The parts of the liver and it functions

At the level of human anatomy, the liver is traditionally divided into two main lobes (right and left) and into a total of 8 segments. In addition, the liver is made up of some well-differentiated structures and cells that fulfill both the liver functions themselves and other tasks of support, transport of substances and protection.

Below we see each of these parts into which the human liver is divided . 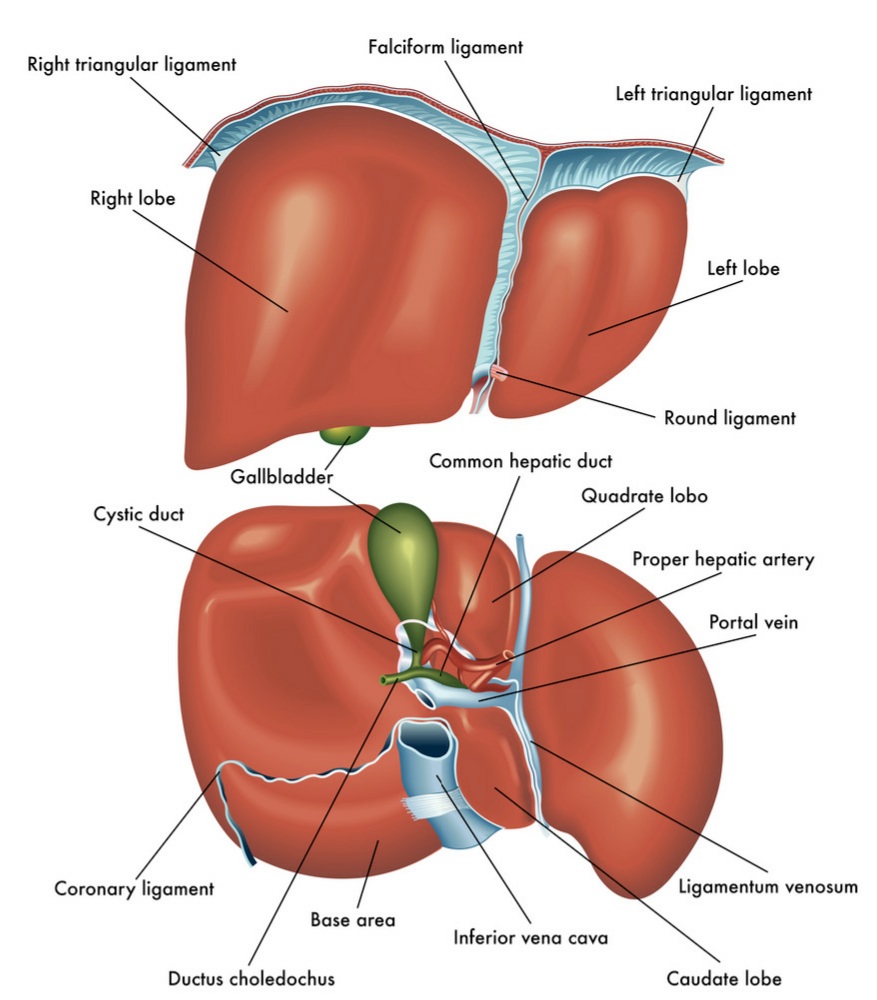 Hepatocytes are the functional cells of the liver, that is, those that are specialized in fulfilling the liver functions that we have seen previously. In fact, 80% of the liver consists of these cells.

Hepatocytes communicate with each other by forming channels through which bile is secreted, which is generated by these cells. In addition, inside, that is, in the intracellular cytoplasm, they have many organelles since in this way they can fulfill the function of storing glucose, iron, fat, etc.

These hepatocytes are also responsible for capturing drugs and other toxins (including alcohol) from the blood and metabolizing them, that is, converting them into molecules that are no longer harmful to the body. All the tasks of the liver occur inside these hepatocytes, which are the functional cells of the liver.

Kupffer cells are the other functional cells of the liver that, although they do not fulfill the liver functions as such, are essential to ensure good health not only liver, but general.

Kupffer cells are cells of the immune system that are exclusively found in the liver. where they fulfill a vital function. These cells are responsible for, when the white blood cells have already fulfilled their function or are too “old” and have lost their functionality, destroy them. In this way, the Kupffer cells remove from the circulation the other immune cells that are no longer functional and stimulate the production of new ones. In this way, the liver also contributes to maintaining a “young” and effective immune system.

In addition, Kupffer cells also help repair injuries that occur in the liver, usually the result of a viral infection such as hepatitis.

The lobes of the liver are not a functional structure as such, but serve to divide the liver anatomically. This is divided, as we have said, into two lobes: left and right. The left lobe is the hemisphere of the liver that is located above the stomach.

The right lobe is the largest and consists of the hemisphere of the liver that is not above the stomach, so it has more space in the abdominal cavity. It is in this portion of the liver where the blood supply is received from the hepatic artery.

However, 80% of the blood supply to the liver comes through the portal vein, the blood vessel that carries non-oxygenated blood to the liver to fulfill its purifying function. The portal vein carries blood from the intestines and spleen to the liver, which is why it is especially important that it be cleansed.

The blood reaches the liver pending purification of toxins, loaded with nutrients that will be (or not, depending on the circumstances and the needs of the organism) stored in the hepatocytes, with “old” immune cells, and so on. This portal vein, once inside the liver, branches into smaller and smaller capillaries that allow direct contact between the blood and the hepatocytes for the liver to fulfill its functions.

The gallbladder is a muscular sac located under the liver that stores bile, a substance generated by hepatocytes and which is of vital importance during digestion, as it allows food to break down properly. In this gallbladder, bile, which is only needed at specific times, is stored until its presence in the duodenum is required.

The common hepatic duct is the bile duct which, in this case, arises from the liver. It is the tube that sends the bile generated by the hepatocytes to the point of union with the cystic duct to either send the bile to be stored in the gallbladder or to send it to the digestive system. In the latter case, the common bile duct comes into play.

The common bile duct arises from the junction between the cystic duct and the common liver, which converge to form a single bile duct. When bile is needed as food is being digested, bile leaves the gallbladder and travels through the common bile duct to the duodenum, which is the initial part of the small intestine. Bile is the gastric juice that is released in this part of the digestive system to allow proper breakdown of food.

Ligaments are portions of fibrous tissue that, although they do not fulfill the liver functions as such, are essential to give it structure and maintain the anatomy of this organ. In the case of the coronary ligament, it is the liver tissue that joins the liver to the diaphragm to ensure that it maintains its position in the abdominal cavity.

The triangular ligaments are those that give shape to the two lobes of the liver, both the right and the left, so that they have the characteristic structure and fit into the abdominal cavity. The left ligament is particularly well defined, and this triangular shape can be appreciated.

The round ligament is a kind of fibrous cord (or extension) that arises from the lower central part of the liver and that joins it with the duodenum to ensure the correct release of bile and, in addition, acts as a support for both the portal vein and the the hepatic artery.

The falciform ligament is a portion of fibrous tissue that, together with the coronary, is responsible for ensuring that the liver remains attached to both the diaphragm and the walls of the abdominal cavity. 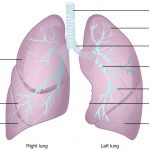