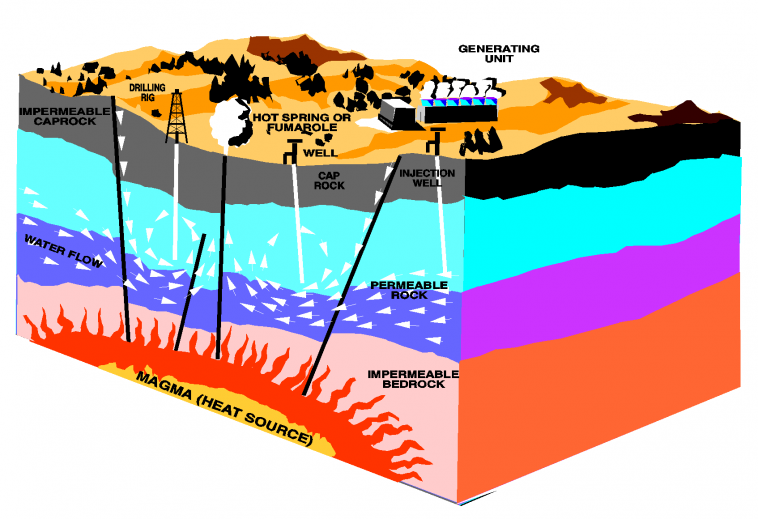 WHAT IS GEOTHERMAL ENERGY?

Basically, geothermal energy is that energy that is obtained by extracting and harnessing heat from the Earth’s interior. Thus, this heat energy is a partially renewable and highly available resource Produced in the depths of our planet, it is transmitted by thermal conduction to the surface.

Geothermal energy  has its origin in the different temperatures that occur between the interior of the Earth and the surface, which is known as thermal gradient .

Usually, the temperature increases from 2 to 4 degrees every 100 meters towards the interior of the Earth . That is, it would be a renewable energy and that is still quite unknown in terms of its possibilities.

Its operation is based mainly on the use and administration of heat that accumulates in the subsoil . This heat content is used through the use of Geothermal Heat Pumps to heat in winter, cool in summer and supply hot water.

Therefore, it gives or extracts heat from the Earth, as we want to obtain cooling or heating, through a set of collectors (panels) buried in the subsoil through which a solution of water with glycol circulates.

Although there is still a lot of ignorance, there are already countries that work with this geothermal energy. Sweden was the first country in Europe where geothermal energy was used, after the oil crises suffered in 1979. In addition, in countries such as Finland, the United States, Japan, Germany, Holland and France, it is a well-known energy and implanted for decades.

Now that we know much more, it is time to analyze the advantages of geothermal energy

On the one hand, geothermal energy is one of the energies considered as ” clean “, although it is not as much as solar or wind. Fossil resources are not used for its production or chemical combustion processes are carried out. The production of energy by means of the heat of the interior of the Earth does not cause the emission of greenhouse gases and, therefore, does not cause damage to the ozone layer nor does it contribute to climate change and global warming.

It is an energy that also produces almost no waste , at least it produces them to a much lesser extent than other energies that use fossil resources or radioactive materials.

The costs of producing electricity from this type of energy are very cheap, cheaper than in coal plants or nuclear power plants.

4. Offer more energy than other resources

Geothermal energy is the one that offers the most resources. It is believed that the current geothermal energy is capable of offering more energy than all the world’s oil, natural gas, coal and uranium together . In fact, the thermal energy losses during the heat transfer from the bottom of the well to the surface are very minimal. This energy remains stable throughout the different seasons. In addition, the thermal inertia is high since the heat source is located several meters underground. Thanks to its insulating function, the latter prevents thermal transmissions. It is a renewable resource, provided that its extraction rate is lower than the natural recharge rate.

– It is a source that would prevent many countries from energy dependence from abroad.

– It is an energy that is already being used in different countries, so it is fully functional. An alternative to other energies and that should be more studied.

– Its extraction does not generate external noise or noise pollution

– Geothermal resources, today, are almost inexhaustible for the human being.

– Its distribution is not subject to international legislation, so prices can be applied at national or local level.

– The facilities of geothermal plants are smaller than others. In addition, it does not need dams or felling trees to settle.

11. A perfect energy for residential use: And when we talk about residential use, we not only have to think about electricity generation but, above all, heat generation. To do this, just have a heat pump and install the heat exchanger in the subsoil. The reasoning is very simple: being buried enjoys a constant temperature of between 8 and 10ºC throughout the year. Thanks to this, the energy consumption is much less to reach 22 or 23ºC in the home, both in summer and winter, while at home you can enjoy hot water practically without cost.

Time now to review the cons  of geothermal energy

One of its main drawbacks is the poor development of this type of energy. In some cases, as in Spain, this energy has not been used at all and, in fact, it is almost never mentioned among renewable energies . It has not been until the last years when they have begun to develop plans to open geothermal plants in the Canary Islands, where due to their volcanic origin there is great potential for this type of energy. There are also other regions with possibilities of geothermal exploitation that have not yet been exploited: Catalonia, Balearic Islands, Valencia, Madrid, Albacete … All these places are capable of housing low intensity geothermal plants.

Another problem is that there could be cases of accidents or leaks that could cause the expulsion of hydrogen sulfide, arsenic or other contaminating substances. Hydrogen sulfide is a substance that is lethal to humans in high doses, while arsenic or ammonia could contaminate the surrounding land and water.

It is an energy that is found in very specific areas, which hinders its exploitation. In fact, only a small part of geothermal resources is being exploited. Something that could increase if it were invested in the matter. On the other hand there are the limitations for its implementation . Geothermal power plants must be installed in areas where the heat of the subsoil is very high. Occasionally, these types of plants should also be located in hard to reach areas.In relation to its location, it should also be noted that this type of energy cannot be transported and must be consumed in the same place it is produced. That is, the plants are designed for local supply.

4. Danger – In some countries, the sudden cooling of hot stones has resulted in cracking and, therefore, microseisms.Some areas near geothermal plants there have been cases of small earthquakes , produced by the cooling and breaking of rocks in the earth’s crust.

5. More danger – There are occasions when hydrogen sulfide is detected by its strong smell, but other areas where it is not perceived and inhalation can be lethal.

6. Pollution – One of the biggest risks is that it can contaminate nearby waters with elements such as arsenic or ammonia. Noise pollution In initial phases in which the drilling of wells is necessary, up to 115 decibels (almost the noise generated by the engine of an airplane) are reached, although once performed, its usual operation produces hardly any external noise (it is among the 75 and 80 decibels, the noise of a vacuum cleaner).There may also be thermal pollution

7. Landscape – The thermal pollution it produces can lead to the deterioration of the landscape in the area

8. Non-transportable – Being a primary energy, it cannot be transported.

9. It should also be noted that to build the facilities, infrastructure and to proceed to the extraction of heat from rocks and terrestrial magma, it is necessary to make important changes in the terrain and in the landscape that cause a great landscape impact .

10. On the other hand, it should be noted that it is a relatively new energy and that it is still very little used. Surely the processes used for the extraction of the material are still somewhat “rustic” and that, with the passage of time, more effective methods will be devised to obtain energy (and even transport it) from the interior of the earth.

11. It should be noted that, although there is still a lot of magmatic rock and heat inside the earth, geothermal energy is not an inexhaustible energy .

12. The plants or geothermal plants must be installed in places where the heat of the subsoil is high.

13. This energy is not transportable and must be used on site , that is, in the same place it is produced (local supply).

13. They produce an impact on the landscape, since the construction of the facilities to extract the heat from the underground rocks and the magma modifications must be made in the terrain.

14. Small earthquakes occur in areas close to geothermal plants due to abrupt cooling and breakage of rocks in the earth’s crust. 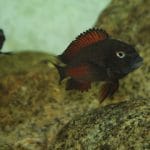 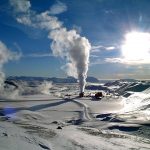